Apple (AAPL - Free Report) stock helped the Nasdaq hit new highs this week and the company reached its own records on Friday heading into the release of its first quarter fiscal 2021 earnings results on Wednesday, January 27. Apple has now jumped nearly 30% since the end of October and analysts are high on its newest iPhone.

Apple needs no introduction as it continues its steady expansion beyond iPhones into services and more. But despite its successful diversification, its flagship smartphones still play a vital role at the company and on Wall Street, and accounted for 50% of total revenue in fiscal 2020.

Luckily, Wall Street is high on its first 5G-capable iPhone that launched in October. The iPhone is available in four models at various price points. Apple priced its higher-end models roughly the same as last year’s iPhone 11, despite the new features and its 5G abilities. And Morgan Stanley analyst Katy Huberty called the iPhone 12 “Apple’s most successful product launch in the last five years.”

Apple has also benefitted from stronger Mac and iPad sales during the remote work and school environment. And its wearables unit that includes its smartwatch and popular wireless headphones has also grown, up 25% last year to top its key services unit’s 16% expansion.

Apple now has revenue streams coming from its massive App store, subscription services such as Spotify (SPOT - Free Report) competitor Apple Music, as well as its streaming TV service that hopes to one day compete against  Netflix (NFLX - Free Report) and others. The company also has a news offering, video gaming, and more.

Before moving on, it is also worth remembering that Apple is pushing harder to bring more of its chips in-house. The move is projected to help cut costs and improve battery life and performance, as it continues to close the loop, while diversifying. There are even reports that Apple is trying to enter the electric vehicle space. 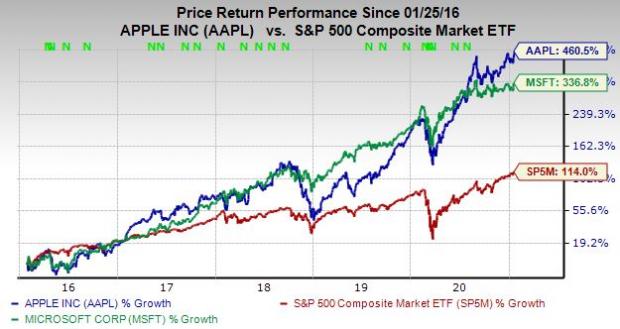 Apple’s ambitious plans can go even further given that it ended last quarter with about $80 billion in net cash. The company has been slowly reducing its cash position to try to reach “a net cash neutral position over time.” Last quarter, it returned around $22 billion to shareholders via dividends and buybacks—its dividend yield rests at 0.60% right now.

Apple also remains the world’s most valuable brand and its stock price has outpaced Microsoft (MSFT - Free Report) and Amazon (AMZN - Free Report) over the last five years, up 460%. More recently, its shares have climbed 75% in the last year and 22% in the past three months.

Apple trades at 7.1X forward 12-month sales. This marks only a slight premium to its industry and represents a solid discount to Microsoft’s 10.2X, as it has for years. And AAPL’s 4-for-1 stock split at the end of the summer made it more attainable and attractive to many investors.

The pandemic forced Apple to push back the release of its next-generation iPhone to October and not late September. This will help slightly boost its Q1 fiscal 2021 sales, as it goes up against an easier-to-compare period.

Zacks estimates call for Apple’s adjusted first quarter earnings to climb over 11% to $1.39 a share, on nearly 12% strong revenue that would see it pull in over $100 billion in a single quarter for the first time ever, at $102.6 billion.

Apple’s fiscal 2021 revenue is then projected to jump 17%, with its adjusted earnings expected to come in 23% higher. And AAPL’s positive longer-term earnings revisions help it land a Zacks Rank #2 (Buy) right now.

There are always risks to playing a stock for near term gains around earnings, especially when it has surged to new highs heading into earnings. That said, longer-term investors shouldn’t worry about trying to time Apple if they are optimistic about its counited success.

Strong Tech Dividend Stocks to Buy with Nasdaq at Records