Revenues of $148.5 million surpassed the Zacks Consensus Estimate of $147.9 million. Moreover, the top line rose 0.9% sequentially and 24.7%from the year-ago quarter.

The company’s solid momentum across data center, telecommunications, and industrial and defense markets drove the top line in the reported quarter.

Further, the strong performance delivered by the company across all the operating regions — United States, China, the Asia-Pacific and others — contributed well.

Coming to the price performance, MACOM has returned 95.1% over a year, outperforming the industry’s growth of 40.7%.

The company expects to strengthen 5G network deployments to continue driving revenue growth from the telecommunications market in the days ahead. Further, the rapid adoption of cloud-based services is likely to continue to aid the top line from the data center market.

Also, robust product offerings in the industrial and defense markets are other positives. 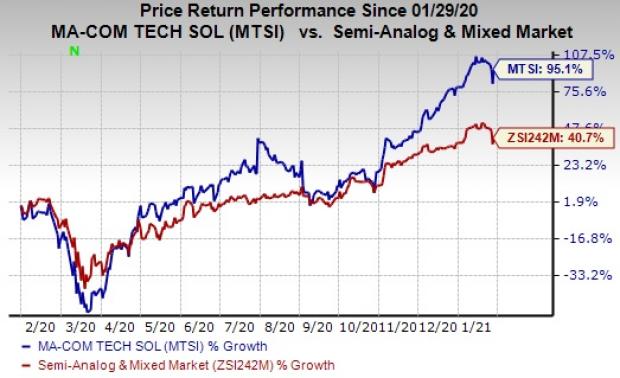 Telecom Market: The company generated revenues of $51.5 million (34.7% of total revenues) from this market, up 13% from the year-ago quarter.

Data Center Market: This market generated revenues worth $35.5 million (23.8% of total revenues), which rose53.6% from the prior-year quarter.

In the reported quarter, non-GAAP operating expenses were $47.6 million, which declined 6.1% year over year. As a percentage of revenues, the figure contracted significantly from 42.6% in the prior-year quarter to 32.1%.

Consequently, the company’s non-GAAP operating margin was 25.4%, which significantly expanded from 10.9% in the prior-year quarter.

Long-term debt obligations, excluding the current portion, were $650.9 million in the fiscal first quarter compared with $652.2 million in the previous quarter.

Cash generated from operations was $34.8 million, down from $74.4 million in the last quarter.

Further, the company’s free cash flow in the reported quarter was $31.9 million compared with $69.5 million in the prior quarter.

For second-quarter fiscal 2021, MACOM expects revenues between $148 million and $152 million. The Zacks Consensus Estimate for the metric is pegged at $145.01 million.

Further, the company’s adjusted earnings per share are anticipated to be 46-50 cents. The Zacks Consensus Estimate for the same is pegged at 38 cents per share.

Moreover, non-GAAP gross margin is anticipated to be 57-59%.

Long-term earnings growth rates of Qorvo, Synaptics and Microchip are pegged at 15.8%, 10% and 14.9%, respectively.

What's in Store for Murphy USA (MUSA) This Earnings Season?