Why You Should Add AngioDynamics (ANGO) to Your Portfolio

AngioDynamics, Inc. (ANGO - Free Report) is likely to gain from a series of regulatory clearances and a robust product portfolio.

In the past three months, shares of the company have gained 71.2% compared with the industry’s growth of 9.3%.

With a market capitalization of $711.5 million, the company designs, manufactures and sells a wide range of medical, surgical and diagnostic devices, which are generally utilized in minimally invasive, image-guided procedures. The company has a trailing four-quarter earnings surprise of 99.2%, on average.

The company continues to enjoy healthy demand for its coveted NanoKnife system to treat tumors. On the R&D front, the company continues to focus on investments in its three key technologies, namely AngioVac, Auryon and NanoKnife while working on ways to improve the profitability of its other products. For fiscal 2021, it anticipates R&D expenses between $35 million and $40 million.

The company is on track to deliver two new AngioVac products in the calendar year of 2021. It continued to witness a strong momentum in its NanoKnife suite with surging disposable sales in the second quarter of fiscal 2021, backed by the strong capital sales in fiscal 2020 as well as the increased visibility of this technology’s uniqueness, demonstrated by the comprehensive DIRECT study. NanoKnife probe sales jumped 30% in the fiscal second quarter, driven by 76% growth in the United States. Solid probe sales are led primarily by the increased installed base, resulting from sturdy NanoKnife capital sales. 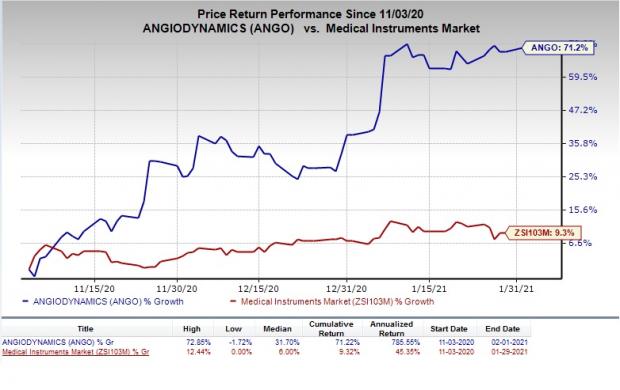 In September 2020, the company launched the Auryon Atherectomy System, a newly developed path-breaking technology for the treatment of Peripheral Artery Disease, which includes Critical Limb Ischemia and In-Stent Restenosis. Laser atherectomy procedures with AURYON laser have continued gaining traction along with other procedures.

The company’s PATHFINDER and DIRECT studies continue to be its primary focus and the activities in these two studies steadily improved through the fiscal second quarter. By the end of this period, 26 DIRECT study sites secured an Institutional Review Board (IRB) approval. PATHFINDER Auryon Registry study with nine sites initiated enrolling subjects. Currently, the company has completed about 75% of its enrollment target and management expects the entire process to be over by the end of the fiscal third quarter.

For fiscal 2021, the Zacks Consensus Estimate for revenues is pegged at $283.2 million, suggesting an improvement of 7.2% from the year-ago quarter’s reported figure. For adjusted earnings per share, the same stands at a couple of cents, indicating a decline of 77.8% from the prior-year period’s reported number.

Align Technology has a projected long-term earnings growth rate of 19%.

IDEXX has a projected long-term earnings growth rate of 15.8%.

PerkinElmer has an estimated long-term earnings growth rate of 19.5%.