Acorda (ACOR) to Report Q4 Earnings: What's in the Cards?

Acorda's earnings history is mixed. The company beat estimates in three of the last four quarters while missing the same once, with the average beat being 16.24%. In the last-reported quarter, the company delivered an earnings surprise of 23.33%.

Shares of Acorda have skyrocketed 77.5% year to date compared to the industry’s increase of 11.5%. 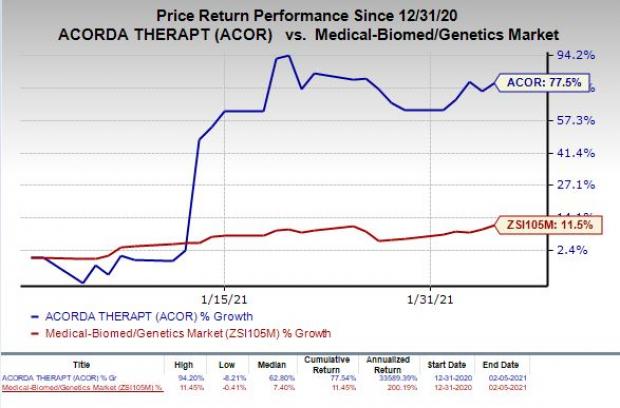 Acorda’s Parkinson’s disease drug Inbrija was launched in the United States and in Europe in February 2019 and September 2019, respectively. Sale of the drug has been rising sequentially every quarter ever since, a trend that most likely continued in the soon-to-be-reported quarter as well.

Meanwhile, Acorda’s multiple sclerosis drug Ampyra is facing generic competition in the United States. Sales of Ampyra plunged significantly year over year due to generic launches. This sales erosion is likely to have hurt the company’s fourth-quarter top line.

Also, for full-year 2020, preliminary net revenues for Inbrija and Ampyra are expected to be approximately $24 million and $98 million, respectively.

Last month, Acorda entered into a definitive agreement with Catalent, Inc. CTLT for selling its Inbrija manufacturing operations in Chelsea, MA for $80 million upfront payment in cash. With this deal, Acorda is looking to save around $10 million in annual operating expenses which will help the company reduce its debt in the long run. Investors will be keen to get more updates regarding this at the upcoming earnings call.

Last month, Acorda also announced a corporate restructuring plan to cut its workforce by approximately 16%, which is likely to save annual costs by around $6 million, beginning this year. Along with this, the company issued expense guidance for 2021.

Acorda expects to reduce operating expenses by approximately $40 million annually, resulting from the sale of the Chelsea manufacturing unit, restructuring procedure and other cost reductions.

Our proven model does not conclusively predict an earnings beat for Acorda this season. The combination of a positive Earnings ESP and a Zacks Rank #1 (Strong Buy), 2 (Buy) or 3 (Hold) increases the odds of a positive surprise. But this is not the case here.

Earnings ESP: Acorda has an Earnings ESP of 0.00% as both the Most Accurate Estimate and the Zacks Consensus Estimate are pegged at a loss of $2.00 per share. You can uncover the best stocks to buy or sell before they're reported with our Earnings ESP Filter.

Here are some biotech stocks that have the right combination of elements to beat on earnings this time around: