AstraZeneca’s (AZN - Free Report) fourth-quarter 2020 results were impressive as it beat estimates for earnings as well as sales. The company also issued guidance for 2021

Fourth-quarter 2020 core earnings of 54 cents per American depositary share (“ADS”) beat the Zacks Consensus Estimate of 53 cents. Core earnings per share of $1.07 were up 24% year over year at constant exchange rates (“CER”).

Total revenues were up 11% on a reported basis and 10% at CER to $7.41 billion in the quarter, driven by higher product sales. Revenues comfortably beat the Zacks Consensus Estimate of $6.98 billion. However, sales were hurt due to COVID-19.

Shares of AstraZeneca were up 1.1% in pre-market trading on Feb 11, following the announcement of fourth-quarter results. In the past year, the company’s shares have risen 0.8% compared with an increase of 2.8% for the industry. 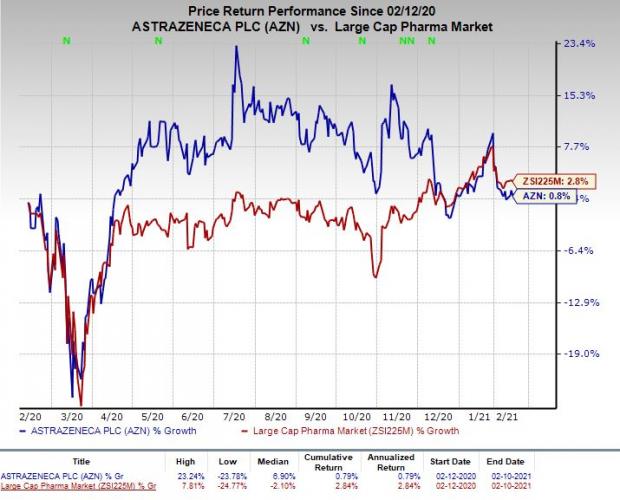 Product sales rose 11% at CER to $7 billion driven by higher sales of oncology medicines and diabetes drug, Farxiga, which made up for the decline in the Respiratory & Immunology franchise.

Collaboration revenues were $399 million, down 4% at CER.

In Oncology, Lynparza product revenues rose 40% year over year to $496 million on the back of strong uptake in prostate cancer and first-line ovarian cancer. AstraZeneca markets Lynparza in partnership with Merck (MRK - Free Report) .

Lynparza collaboration revenues were down 7% year over year to $325 million. This included $25 million in regulatory milestone payments and $300 million in sales milestone.

Tagrisso recorded sales of $1.16 billion, up 28% year over year. Imfinzi generated sales of $555 million in the quarter, up 29% year over year on strong demand in advanced lung cancer patients, partially offset by the impact of COVID-19.

Iressa sales were down 19% to $67 million. Sales of older cancer drugs, Arimidex, Faslodex and Casodex declined while Zoladex increased.

In CVRM, Brilinta/Brilique sales were $363 million in the reported quarter, down 15% year over year due to the impact of COVID-19 and pricing pressure from the VBP (volume-based procurement) program in China.

Farxiga recorded product sales of $586 million in the quarter, up 40% year over year, reflecting growth across all regions.

Fasenra recorded sales of $283 million in the quarter, up 35% year over year driven by strong demand, partially offset the impact of lower new patient starts due to COVID-19.

Bevespi, a LAMA/LABA in a pressurized metered dose inhaler, recorded sales of $12 million in the quarter, up 4% year over year.

AstraZeneca provided guidance for revenues and core earnings in 2021. The company expects total revenues to increase in low-teens percentage. Core earnings are expected to remain between $4.75 and $5.00 per share.

The guidance does not include any future sales from the COVID-19 Vaccine AstraZeneca (C19VAZ) and any material impact of the Alexion Pharmaceuticals (ALXN - Free Report) acquisition expected to be completed in the third quarter of 2021.

AstraZeneca stated that the uncertainty from the impact of COVID-19 remains and performance between quarters may vary.

AstraZeneca received approval for its coronavirus vaccine, C19VAZ, in December last year in the United Kingdom followed by Europe and a few other countries. Earlier this month, the World Health Organization recommended usage of the vaccine in adult patients. The company recorded $2 million in sales from the vaccine during the fourth quarter.

Apart from the vaccine, the company is conducting five phase III studies on AZD7442, a long-acting antibody combination therapy for the prevention and treatment of COVID-19.