The biotech sector continues to be in focus with regulatory and pipeline updates from quite a few companies. New drug approvals are also in the spotlight.

Regeneron Gets FDA Approval of Cholesterol Drug: Regeneron Pharmaceuticals, Inc. (REGN - Free Report) announced that the FDA has approved Evkeeza (evinacumab-dgnb) as an adjunct to other low-density lipoprotein cholesterol (LDL-C) lowering therapies to treat adult and pediatric patients aged 12 years and older with homozygous familial hypercholesterolemia (HoFH). The FDA approval was based on results from the phase III ELIPSE HoFH trial. The trial met its primary endpoint, with Evkeeza-treated patients witnessing reduced LDL-C from baseline by 49%, on average, compared to placebo at week 24.

Earlier, Regeneron announced that the United States Court of Appeals for the Federal Circuit upheld the decision by the U.S. District Court for the District of Delaware that Amgen's (AMGN - Free Report) asserted patent claims directed toward PCSK9 (proprotein convertase subtilisin/kexin type 9) antibodies are invalid based on the lack of enablement. The ruling means that Regeneron and Sanofi have successfully invalidated all five of Amgen's asserted claims relevant to Praluent (alirocumab).

Amgen’s Lung Cancer Drug Gets Priority Review: Amgen announced that the FDA has granted Priority Review to sotorasib for the treatment of patients with KRAS G12C-mutated locally advanced or metastatic non-small cell lung cancer (NSCLC), following at least one prior systemic therapy. The Prescription Drug User Fee Action (PDUFA) date for sotorasib is Aug 16, 2021. The NDA is being reviewed by the FDA under its Real-Time Oncology Review. Amgen has also submitted a Marketing Authorization Application (MAA) in the EU in December 2020.

The company received a report last week that a patient who was treated more than five years ago in Group A of HGB-206 was diagnosed with AML. Consequently, the company is investigating the cause of this patient’s AML in order to determine if there is any relationship with the use of BB305 lentiviral vector in the manufacture of LentiGlobin gene therapy for SCD. In addition, a second SUSAR of myelodysplastic syndrome (MDS) in a patient from Group C of HGB-206 was reported last week. This case is also being investigated by the company.

Separately, bluebird has also decided to temporarily suspend marketing of Zynteglo (betibeglogene autotemcel) while the AML case is assessed even though no case of hematologic malignancy has been reported in any patient who has received treatment with Zynteglo for transfusion-dependent β-thalassemia. This is because it is also manufactured using the same BB305 lentiviral vector used in LentiGlobin gene therapy for SCD.

Cortexyme Slides on CRL:  Shares of clinical-stage biopharmaceutical company, Cortexyme, Inc. (CRTX - Free Report) , plunged after it received a CRL from the FDA. The CRL informs the company of a partial clinical hold placed on pipeline candidate, atuzaginstat (COR388). The CRL will impact the open-label extension (OLE) phase of the ongoing GAIN Trial. The study is a randomized, double-blind, placebo-controlled phase II/III study evaluating the efficacy, safety and tolerability of atuzaginstat, an investigational gingipain inhibitor, in patients with mild to moderate Alzheimer’s disease. The partial clinical hold was initiated following the review of hepatic adverse events in the atuzaginstat trial by the FDA.

The Nasdaq Biotechnology Index lost 2.74% in the last five trading sessions. Among the biotech giants, Gilead lost 3.71% during the period. Over the past six months, shares of Alexion have surged 52.5%. (See the last biotech stock roundup here: Biotech Stock Roundup: Q4 Results of BMY, REGN, BIIB & Other Regulatory Updates). 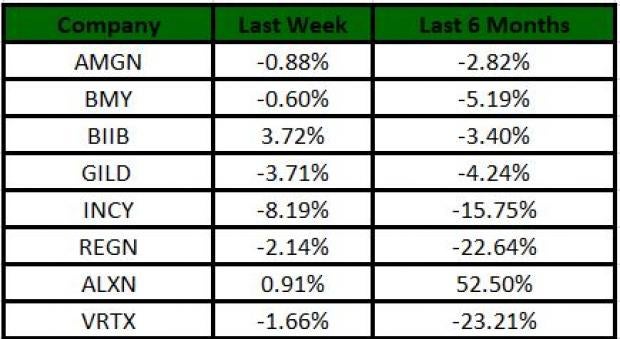