The S&P 500 and the tech-heavy Nasdaq slipped during the week of February 15, after they closed at new records last week. Despite the drop in some of the big tech names such as Apple (AAPL - Free Report) , Facebook (FB - Free Report) , Microsoft (MSFT - Free Report) , Zoom Video (ZM - Free Report) , and countless others this week, the market fundamentals remain relatively strong.

Ebbs and flows, as well as pullbacks and corrections are healthy aspects of the market. And they need not be viewed as anything but normal occurrences, especially as strong earnings results continue to pour in. Better yet, the outlook for the first quarter and the rest of 2021 has improved significantly.

Vaccine distribution will hopefully help the economy roar back by the summer and lift some of the hardest-hit areas of the economy. Meanwhile, Wall Street is banking on more spending under the Biden administration and the Fed remains firmly committed to keeping interest rates low.

All of these factors set up a bullish outlook for 2021. But instead of focusing on companies that need a vaccine to really grow, let’s look at two tech stocks that have posted big sales growth during the pandemic and are ready to expand for years within futuristic industries…

Every major automaker, from Ford (F - Free Report) to Volvo, is racing to roll out more electric vehicles as they try to catch Tesla (TSLA - Free Report) . Luckily for investors, the EV market is far from a zero-sum game and newcomers continue to enter the space. Chinese EV maker NIO is a rising star in the booming market, as its sales continue to grow. The company is also focused on autonomous driving tech, as well as batteries, which are the lifeblood of the industry.

NIO sells multiple models that are somewhat in-line with Tesla, from smaller SUVs to sedans. The company said in early January that it delivered 17,353 vehicles in the fourth quarter, which marked a 110% jump.

Overall, NIO’s full-year deliveries surged 113% to nearly 44,000 vehicles in 2020. And its January 2021 figures were even more impressive, with deliveries up 350% from the year-ago period to push its overall cumulative deliveries to 83K.

With this in mind, Zacks estimates call for NIO’s FY20 revenue to jump 120% to $2.49 billion, with FY21 projected to come in another 97% higher to reach $4.89 billion. The Chinese EV company is also expected to significantly shrink its adjusted losses during this stretch.

NIO has topped our EPS estimates in the trailing two periods and its positive earnings revisions help it land a Zacks Rank #2 (Buy) heading into the release of its Q4 results on March 1. 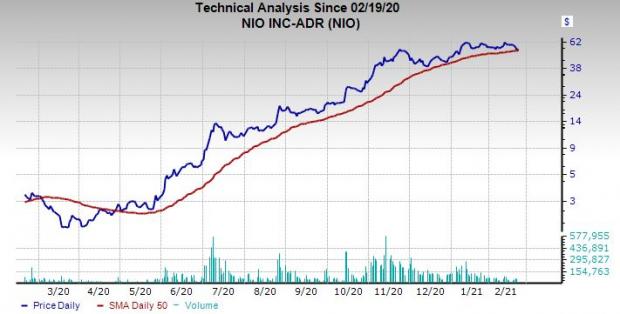 NIO, which rocks an “A” grade for Growth in our Style Scores system, has seen its stock skyrocket over 1,000% in the last year and 300% in the past six months. Luckily for investors who missed the ride, NIO has cooled down, up only 12% in the last three months.

At roughly $55 per share, it’s down about 13% from its late January records. The recent downturn has seen it fall from overbought in terms of the Relative Strength Index to around 45—an RSI above 70 is often regarded as overbought, with any number below 30 considered oversold.

NIO’s recent price performance could give it room to run if it’s able to impress Wall Street. And the stock jumped over 1% through morning trading Friday, as it bounces off its 50-day moving average. NIO shares also trade at a discount compared to other high-flyers at 12.7X forward sales, which marks a discount against Tesla’s 15.5X and comes in 25% below its own six-months highs.

Three out of the nine brokerage recommendations that Zacks has for NIO come in at a “Strong Buy,” with none below a “Hold.” NIO might be worth buying as a long-term play that’s far less expensive than Tesla ($784 a share), in a world where EVs already accounted for over 30% of Volvo’s new car sales in Europe in 2020. And let’s remember that China is one of the world’s largest EV markets.

CrowdStrike is a cloud-focused cybersecurity firm that utilizes machine learning and AI to protect endpoints and cloud workloads. This is crucial in the cloud age that’s full of rapidly expanding endpoints, which include laptops, desktops, smartphones, IoT devices, and more.

Remote work and schooling pushed this area of the ever-growing cybersecurity space to the forefront, but it was already booming. More importantly, as devices proliferate and our digitally-connected world grows more complex, it becomes more vulnerable.

CrowdStrike on February announced plans to bolster its offerings through the acquisition of Humio for $400 million—expected to close in the first quarter. Humio provides high-performance cloud log management and observability technology. The deal is set to “further expand its eXtended Detection and Response (XDR) capabilities by ingesting and correlating data from any log, application or feed to deliver actionable insights and real-time protection.”

CrowdStrike, which went public in the summer of 2019, has soared nearly 280% in the past 12 months. More recently, the stock is up 65% in the last six months, and it already bounced back to new records—which it hit earlier in the week—after it slipped in mid-January.

The stock is firmly a growth play at the moment, trading at 42.7X forward sales, which puts it right in line with e-commerce giant Shopify (SHOP - Free Report) . Despite its run, the stock is not currently considered overbought, with an RSI of 64.

CRWD’s positive earnings revisions help it grab a Zacks Rank #2 (Buy) at the moment, with it set to release its fourth quarter fiscal 2021 results on March 16. Meanwhile, 14 of the 19 brokerage ratings Zacks has for CRWD come in at a “Strong Buy,” with none lower than a “Hold.”

Looking back, the company crushed our Q3 estimates in December, with sales up 86%. CrowdStrike also lifted its guidance at the time. Zacks estimates currently call for it to swing from an adjusted loss of -$0.02 a share in the year-ago period to +$0.09 in the fourth quarter on 65% stronger sales.

CrowdStrike’s expected growth would come on top of FY20’s 93% sales expansion. The stock has clearly already gone on an impressive run. But it is poised to continue to grow in a world where everything is connected and data is endless. Therefore, cybersecurity firms such as CrowdStrike might make for strong long-term growth plays.