The biotech sector continues to be in focus with regulatory and pipeline updates from quite a few companies. New drug approvals are also in the spotlight. The sector has also been in focus, thanks to the development of antibodies and vaccines for coronavirus gaining importance with each passing day.

Regeneron Obtains FDA Nod for Libtayo in NSCLC: Regeneron Pharmaceuticals, Inc. (REGN - Free Report) and partner Sanofi (SNY - Free Report) obtained FDA approval for a label expansion of their PD-1 inhibitor, Libtayo (cemiplimab-rwlc). The drug is now approved for the first-line treatment of patients with advanced non-small-cell lung cancer (NSCLC) whose tumors have high PD-L1 expression (tumor proportion score ≥50%), as determined by an FDA-approved test. Libtayo was superior in extending overall survival compared to chemotherapy in a pivotal trial that allowed for certain disease characteristics frequently underrepresented in advanced NSCLC trials. Earlier this month, the drug was approved as the first immunotherapy for patients with advanced basal cell carcinoma (BCC) previously treated with a hedgehog pathway inhibitor (HHI) or for whom an HHI is not appropriate, with full approval granted for locally advanced disease and accelerated approval granted for metastatic disease.

Regulatory Updates From Incyte: Incyte (INCY - Free Report) announced that the FDA has accepted for Priority Review its supplemental New Drug Application (sNDA) for lead drug, Jakafi (ruxolitinib), for the treatment of steroid-refractory chronic graft-versus-host disease (GVHD) in adult and pediatric patients 12 years and older. The agency generally grants Priority Review to drugs that offer a major advancement in treatment where none currently exists. This designation shortens the review period to six months compared to 10 months for Standard Review. The target action date for this indication is Jun 22, 2021.

Separately, the agency has also accepted for Priority Review the New Drug Application (NDA) for ruxolitinib cream, a selective JAK1/JAK2 inhibitor designed for topical application, as a treatment for atopic dermatitis (AD), a type of eczema.

These patients will be randomized to receive either the combination of bempegaldesleukin and Keytruda or only Keytruda. The phase II portion of the study will include an interim analysis of the overall response rate (ORR) after the first 200 patients enrolled have a minimum follow-up of 4 months. The study will be continued only if the ORR passes a prespecified futility boundary.

Immunome Surges on Antibodies Update: Shares of Immunome, Inc. (IMNM - Free Report) surged after it announced that its discovery engine has isolated potent antibodies capable of neutralizing several SARS-CoV-2 variants, including the South African Variant (B.1.351), in pseudovirus testing. The company is developing a cocktail of antibodies targeting spike and non-spike proteins that can serve as a prophylaxis or treatment for COVID-19. Immunome has identified antibodies that bind to non-overlapping regions of the spike protein, including those regions containing the critical mutational variants while developing the antibody cocktail (IMM-BCP-001).

Otonomy Plunges on Study Data: Shares of Otonomy, Inc. (OTIC - Free Report) plunged significantly after it announced that the late-stage study of Otividex was not successful. The phase III study of Otividex in patients with Ménière’s disease did not achieve the primary endpoint, which was the count of definitive vertigo days (DVD) in month 3 for Otividex as compared to placebo for the intent-to-treat (ITT) population (n = 148; p value = 0.312) using the Negative Binomial Model. The results did show statistical significance for the per protocol (PP) population. 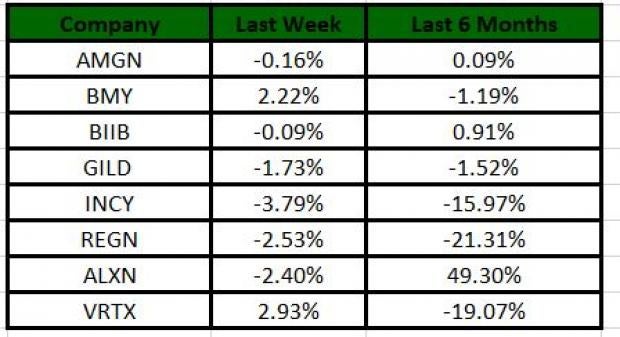