Revenues, primarily from its cardiovascular drug, Vascepa, were up almost 16.7% year over year to approximately $167.3 million in the quarter, beating the Zacks Consensus Estimate of $163.3 million.

Shares of Amarin were down 4.8% on Feb 25 despite strong results. The stock has declined 57.3% in the past year against the industry’s 11.6% increase. 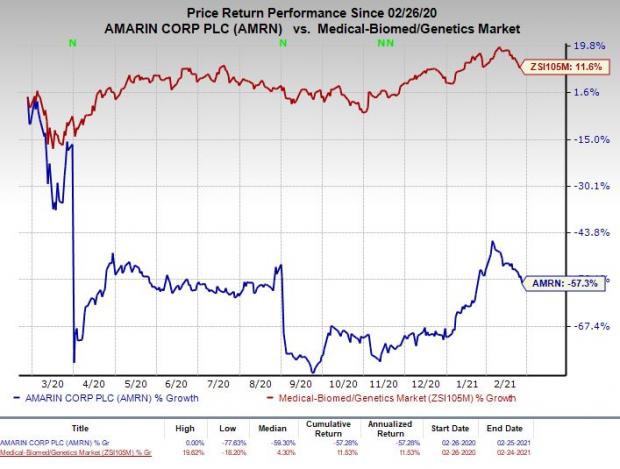 Product revenues, entirely from Vascepa, were $165.9 million, up 16.8% year over year. Strong demand for the drug continues to drive sales higher. The increase in revenues was driven by strong prescription growth as well as recognition of higher net selling price for Vascepa during the quarter. However, demand for the drug was partially hurt by the COVID-19 pandemic.

Per IQVIA, normalized prescriptions for Vascepa increased approximately 18% year over year in the United States during the fourth quarter 2020.

Meanwhile, Hikma Pharmaceuticals launched a generic version of Vascepa in the United States in November last year. The generic’s label includes reduction of triglyceride levels indication but not the cardiovascular risk reduction indication. On the fourth quarter earnings call, the company stated that geberic launch had material impact on Vascepa sales during the quarter.

Amarin reported revenues of $614.1 million for the full year, up 42.9% year over year. The company reported adjusted earnings of 7 cents per ADS for 2020, compared with 2 cents in the year-ago period.

Although Vascepa demonstrated strong growth in the fourth quarter with normalized prescriptions rising year over year, there is uncertainty about the drug’s prospects due to the ongoing pandemic and the launch of a generic in November 2020. Apart from Hikma, Dr. Reddy's Laboratories (RDY - Free Report) ,Teva Pharmaceuticals (TEVA - Free Report) and Apotex Pharmaceuticals are other contenders that may launch a Vascepa generic for a similar indication.

Amarin has filed a lawsuit against Hikma to protect its cardiovascular risk reduction patent rights. However, the generic’s supply has been limited due to lack of qualified supply capacity.

The company announced that the Committee for Medicinal Products for Human Use recommended approval of Vascepa as Vazkepa for cardiovascular risk reduction indication in Europe last month. A decision on Vazkepa approval from the European Commission is expected in April 2021. The company will launch the drug in Europe starting with Germany this year, following a potential approval. Moreover, the Chinese Society of Cardiology has updated their guidelines to include icosapent ethyl (Vascepa) as a treatment consideration to further lower atherosclerotic cardiovascular disease in January 2021. The drug is expected to receive approval in Mainland China and Hongkong by the year-end. These developments are likely to boost the prospects of the drug going forward as Europe and China represent significant market opportunity. Also, there is no generic overhang in these two territories so far. A potential ruling in favor of Amarin in the lawsuit against Hikma will also limit generic competition in the United States to the triglyceride reduction indication.

Amarin anticipates operating expenses in 2021 to be between $550 million and $600 million. However, due to the COVID-19 pandemic and generic competition, the company did not provide any guidance for the drug’s sales in 2021.