Is Broadcom (AVGO) Stock a Great Tech Buy Ahead of Q1 Earnings?

Shares of Broadcom (AVGO - Free Report) have climbed 22% in the last three months to double the semiconductor industry’s average. The chip company also boasts some strong fundamentals, including an impressive dividend yield heading into the release of its Q1 fiscal 2021 financial results on Thursday, March 4.

Tech stocks soared back on the first day of March to help drive the S&P 500 to its best day since June, while the Nasdaq surged 3%. Zoom Video (ZM - Free Report) , Tesla (TSLA - Free Report) , Apple (AAPL - Free Report) , and others were some of the biggest winners on the day, as Wall Street decided it was time to step in and start buying stocks that had been hammered during the last week-plus. The climb helped the tech-heavy index jump back above its 50-day moving average.

The recent pullback from the market’s February 12 highs appears to have been needed and healthy. The selloff, which coincided with rising U.S. Treasury yields, was sparked by increased inflation worries as Wall Street bets on more government spending and a major economic rebound later this year amid the vaccine push.

Despite the possibility of a rotation out of technology into some of the more cyclical economic sectors and areas hit hard by the coronavirus, technology is poised to drive the market and our lives for decades. Therefore, even if there is more near-term selling pressure, adding strong technology stocks appears to be one of the more prudent long-term investment strategies. 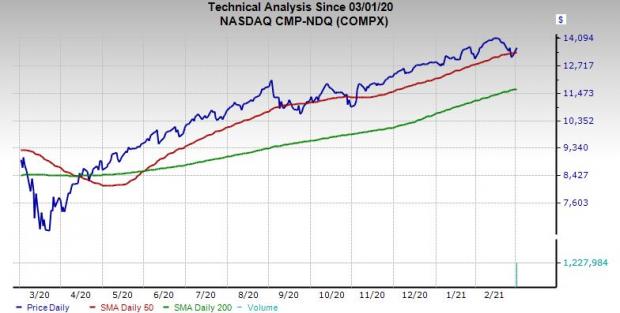 Broadcom is a semiconductor and infrastructure software solutions firm with offerings that are utilized within smartphones, data centers, networking equipment, and other vital areas of tech. Broadcom has committed to expanding its reach with infrastructure software solutions through acquisitions, which includes its $19 billion purchase of CA Technologies in November 2018.

AVGO boasts clients such as Apple. It is worth pointing out that AAPL has its own chip ambitions, which has worried some investors. But it will not come easy for Apple. And Broadcom is coming off a strong year that saw it post record profitability and generate $11.6 billion of free cash flow.

The company is on an impressive run when it comes to top-line expansion. AVGO ended fiscal 2020 on a high note, with fourth quarter sales up 12% for its best performance of the year. Overall, Broadcom’s FY20 revenue popped 6% to roughly $24 billion.

Back in December, CEO Hock Tan said that AVGO continues to benefit from “demand for networking from cloud and for broadband from service providers as well as the significant ramp in wireless, even as enterprise demand remained soft.”

AVGO shares are up 70% the last year and 260% in the past five years to crush the tech sector’s 160%. Broadcom stock has continued its solid run more recently, up over 20% in the trailing three months. And it jumped 4.2% during regular trading Monday to reach $490 a share, which puts it just off its February records.

On top of outperforming the tech sector over the last five years, investors have benefitted from Broadcom’s commitment to raising its dividend. Executives last quarter raised its dividend by 11%. With this in mind, Broadcom’s dividend is yielding roughly 3% at the moment to double the S&P 500 and easily top the recently-climbing 30-year U.S. Treasury’s 2.2%.

Broadcom’s earnings estimates have remained unchanged in the last 30 days, but they are up since its strong Q4 report. AVGO, which is a Zacks Rank #3 (Hold) at the moment, trades at a solid discount against the tech sector and right in-line with its industry’s average at 20.2X forward 12-month earnings.

Broadcom stock could face near-term selling pressure if investors decide to take home profits after its strong run. That said, 19 of the 23 broker recommendations Zacks has for Broadcom come in at a “Strong Buy” and it’s not overbought in terms of RSI.