The major highlight of the last week was the announcement of Cooper Tire’s (CTB - Free Report) acquisition by Goodyear Tire (GT - Free Report) . This transformational deal marks the collaboration of two of the biggest American tire companies. It will create a stronger and industry-leading U.S.-based tire manufacturer, having a more enhanced presence in distribution and retail channels. Awarding of a contract by the U.S. Postal Service (“USPS”) to Oshkosh Corporation (OSK - Free Report) also grabbed headlines.

Meanwhile, we know that the auto industry is currently reeling under chip famine. Last week, the EV behemoth Tesla (TSLA - Free Report) halted its Model 3 production line at the Fremont factory, which will continue till Mar 7. While the reason for the production stoppage has not been confirmed, speculations are rife that acute shortage of semiconductor supply has resulted in a hindrance of operations. During the fourth-quarter earnings call, Tesla — which currently carries a Zacks Rank #4 (Sell) — did acknowledge that the chip deficit could lead to near-term hiccups in production.

1. Goodyear Tire announced its decision to acquire Cooper Tire in a deal having an enterprise value of $2.5 billion. The agreement, which has been approved by the boards of both the companies, is expected to close in second-half 2021.The merged entity will bank on Goodyear’s dominance in original equipment and premium replacement tires, and combine it with Cooper’s forte in the light truck and SUV segments, thus providing a more complete offering to customers.The transaction will boost Goodyear’s earnings per share, thus solidifying the company’s balance-sheet position and enhancing its ability to reduce leverage in the capital structure.

2. Daimler AG signed a deal with Cummins (CMI - Free Report) , per which the latter will supply medium-duty engine systems to Daimler Trucks and Buses starting in the second half of the decade. Per the deal, Cummins will produce medium-duty engines at the Mannheim plant. The partnership will aid Daimler to speed up the development of non-emission technologies. The companies will also assess a broader strategic collaboration by evaluating potential synergies in other areas including powertrain components and engine system components.

3. Oshkosh received a 10-year contract from the USPS to modernize the latter’s fleet of postal delivery vehicles. Per the deal, the USPS would pay Oshkosh $482 million to commence engineering efforts for the production vehicle design. The contract entails the delivery of 50,000-165,000 vehicles over a 10-year period.Production of the next-gen delivery vehicle is anticipated to commence in 2023.

4. Tenneco Inc. (TEN - Free Report) reported adjusted earnings of $1.68 per share for fourth-quarter 2020, beating the Zacks Consensus Estimate of $1.02. Moreover, the bottom-line figure jumped from the year-ago earnings of 28 cents per share. The Illinois-based auto supplier recorded revenues of $4,650 million for the reported quarter, beating the Zacks Consensus Estimate of $4,321 million. The top-line figure also increased from $4,143 million recorded in third-quarter 2019. For full-year 2021, Tenneco anticipates sales and adjusted EBITDA in the band of $17.2-$17.8 billion and $1.3-$1.4 billion, respectively.

5. Carvana Co. (CVNA - Free Report) reported fourth-quarter 2020 loss per share of 41 cents, narrower than the Zacks Consensus Estimate of a loss of 48 cents. The reported loss is also significantly narrower than the year-ago loss of 79 cents per share. For the fourth quarter, total revenues came in at $1,826 million, surpassing the Zacks Consensus Estimate of $1,595 million. Moreover, the top-line figure increased from the year-ago sales of $1,104 million. 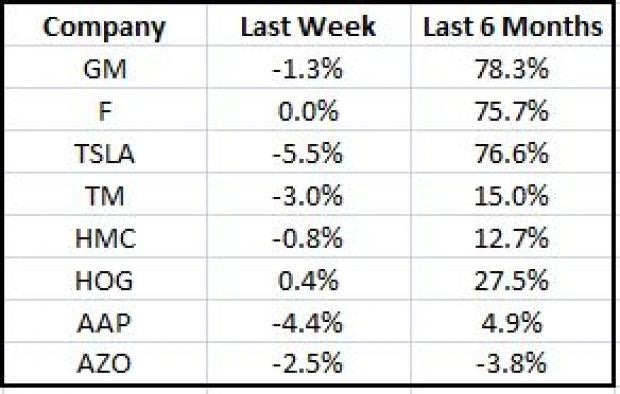