Equinor (EQNR) Completes Interest Sale in Dogger Bank A & B

Equinor ASA (EQNR - Free Report) completed the divestment of a 10% stake in the first two phases of the Dogger Bank Wind Farm in the North Sea of the U.K. to Eni SPA (E - Free Report) .

The 3.6-gigawatts (GW) Dogger Bank Wind Farm is an offshore wind farm, which is currently being prepared in three phases, namely Dogger Bank A, Dogger Bank B and Dogger Bank C. Notably, it is a 50/50 joint venture partnership between the energy company SSE Renewables and Equinor.

The Dogger Bank A and B farm-down deal is Equinor’s third offshore wind transaction in no more than two years, which generated a profit of $1.5 billion. Upon the completion of the transaction, Equinor will have a 40% participating interest in Dogger Bank A and B, while SSE and Eni are expected to own 40% and 20% stakes, respectively.

The first two phases of the project involve an investment of nearly GBP 6 billion, which comprises offshore transmission capital expenditure of around GBP 830 million per phase. Dogger Bank C, the project’s third phase, is being prepared with an alternative plan and is likely to be financially closed by late 2021. Notably, both Equinor and SSE will own equal shares in Dogger Bank C.

On its part, the Dogger Bank Wind Farm is expected to come online by 2026 and Equinor will be responsible for its operations.

Shares of the company have underperformed the industry in the past six months. Equinor has gained 24.8% compared with the industry’s 31.7% growth. 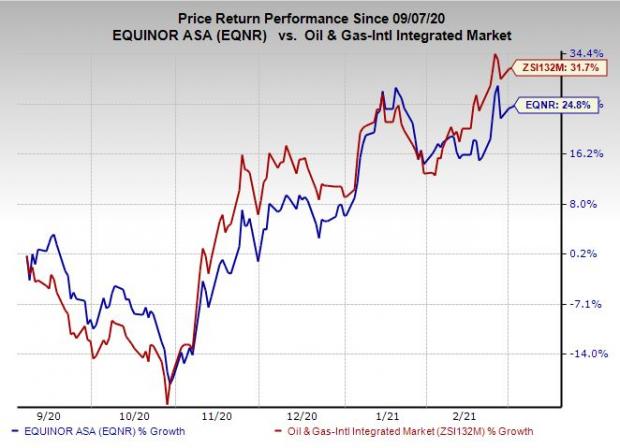