All of the above-mentioned facilities are located in PJM, a regional transmission organization (RTO) and grid system that coordinates the movement of wholesale electricity across thirteen states and the District of Columbia.

How Will This Benefit American Electric?

American Electric will use the contracted off-take to support its growing retail business, which includes its Integrated Renewable Energy (IRE) solution and wholesale loads in PJM. It also includes the long-term retail supply agreement executed in October 2020 with Atlanta Farms Solar Project, which is anticipated to include approximately 600,000 solar panels capable of producing 200 megawatts (MW) of renewable energy.

Notably, this will significantly boost American Electric's expansion plans as the PJM system spans 13 states, which include North Carolina and Michigan.

American Electric has recently revealed plans to invest $7.5 billion in 2021 and $29.8 billion over the 2022-2025 period in its core regulated operations, contracted renewables and wires. Such hefty investments should enable American Electric to drive earnings, expand footprint and achieve long-term earnings growth of 5-7%. Interestingly, its drive investment plans also include incremental investments in renewable generation projects across the United States over the 2022-2025 period.

In April 2019, American Electric Power completed its acquisition of Sempra Renewables, which was then a subsidiary of Sempra Energy (SRE - Free Report) , including 724MW of operating wind generation and battery assets for more than $1 billion. Such strategic investments will further solidify its projected earnings growth rate.

In September 2020, DTE Energy (DTE - Free Report) updated its MIGreenPower voluntary renewables to include an additional 420 MW of solar energy by 2022, with enough solar and wind energy capacity to power 900,000 homes in Michigan. In June 2020, AES Corp.’s (AES - Free Report) subsidiary, AES Solutions Management LLC, issued a request for proposals seeking to purchase up to 1 GW of renewable energy in the PJM Interconnection balancing area.

Shares of American Electric, a Zacks Rank #3 (Hold) company, have lost 16.9% in the past year compared with the industry’s 8.6% decline. You can see the complete list of today’s Zacks #1 Rank (Strong Buy) stocks here. 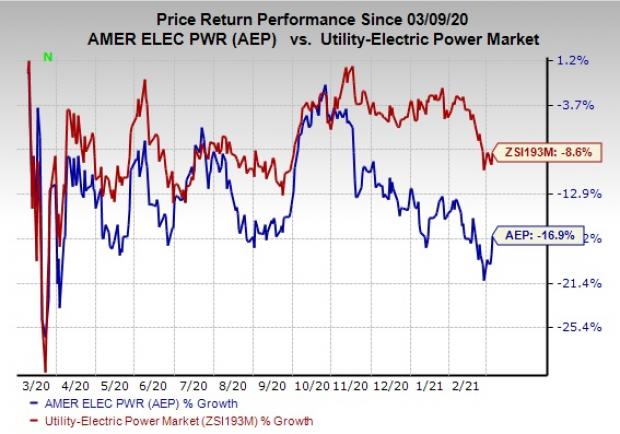