2 Top-Ranked Tech Stocks to Buy on the Dip

On today’s episode of Full Court Finance at Zacks, we look at the market’s movement and fundamentals over the last several weeks. The episode then explores two highly-ranked stocks that fit under the broader technology umbrella, Micron (MU - Free Report) and Align Technology (ALGN - Free Report) , to see if investors might want to consider buying them on the dip amid the recent selling.

Buyers stepped in on Friday afternoon to stop some of the recent bleeding to help the Nasdaq close the day up 1.6%. But the selling continued on Monday, with the tech-heavy index down 2% through late-afternoon trading.

The Nasdaq is currently hovering around 10% off its mid-February highs, as it continues to flirt with correction territory. Meanwhile, some traders are worried the wave of tech selling, which includes big names like Apple (AAPL - Free Report) , Tesla (TSLA - Free Report) , and many others, could persist and push the Nasdaq down to its 200-day moving average. 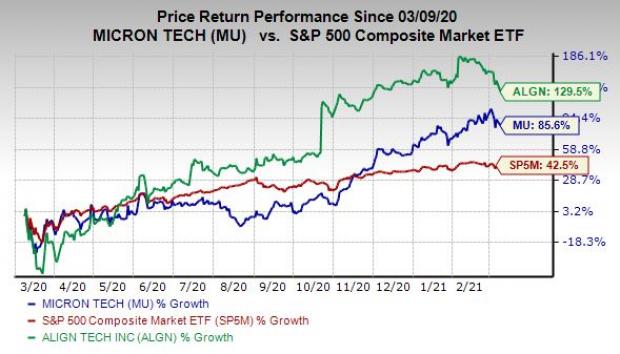 Despite all of the inflation talk and worries about tech valuations, the selling is likely healthy and needed, as countless tech names had soared over 100% in the last year. Plus, many of the bullish market fundamentals remain in place and some of the best tech stocks are now trading at solid discounts.

Today, we explored why Micron and Align, which are both Zacks Rank #1 (Strong Buy) stocks, might be worth buying on the dip.

MU is a memory chip powerhouse that’s returned to growth in a big way and it raised its second quarter outlook at the start of March. Meanwhile, Invisalign maker Align has disrupted the space and continued to outshine many of its newer rivals in the clear orthodontics industry.

Are Nike and FedEx Stock Buys Ahead of Earnings?