AnaptysBio, Inc. (ANAB - Free Report) announced that its phase II study — POPLAR — evaluating its lead candidate, imsidolimab, failed to meet the primary endpoint. The study was evaluating the antibody candidate in patients with moderate-to-severe palmoplantar pustulosis (PPP), a form of auto-inflammatory disease psoriasis. The company does not plan to further develop the candidate as a treatment for PPP.

Shares of AnaptysBio tumbled 33.8% on Mar 8 following the study failure news. The company’s shares have gained 17.8% in the past year compared with the industry’s increase of 10.3%. 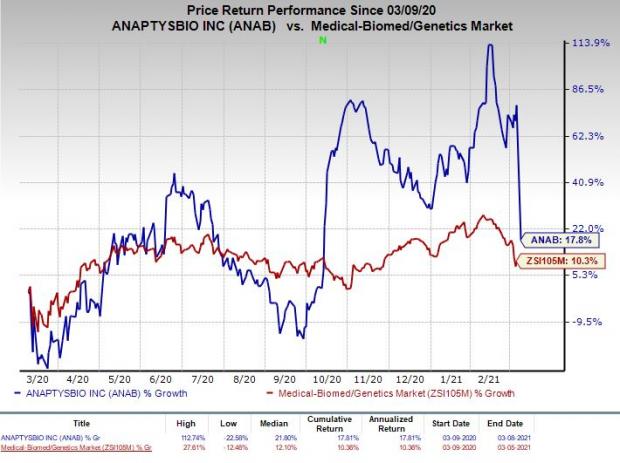 The POPLAR study evaluated an initial dose of 200mg followed by three 100mg doses of the candidate one month apart in PPP patients, who were washed out of prior PPP therapy and no concomitant therapy was allowed during the duration of the study. The study’s primary endpoint was difference between change in Palmoplantar Pustular Psoriasis Area Severity Index (PPPASI) scores from baseline following treatment with imsidolimab and placebo.

Data from the study showed that treatment with imsidolimab achieved difference in change PPPASI score from baseline that was not statistically significant as well as not numerically greater versus placebo after 16 weeks of treatment. Moreover, comparison of other endpoints also gave mixed results for the candidate.

The company had reported promising results from the phase II GALLOP study evaluating the candidate in patients with moderate-to-severe GPP in October last year. The study met its primary endpoint of improvement in the CGI scale on day 29. The company is expected to initiate a phase III study to evaluate imsidolimab monotherapy in GPP patients during mid-2021.

Moreover, multiple data readouts from other studies evaluating the candidate in different indications are scheduled during the course of this year as well as in 2022. Positive study data will boost the company’s prospects. However, several established drugs from companies like J&J (JNJ - Free Report) , Novartis and AbbVie among others are available for targeted indications of imsidolimab.

Meanwhile, AnaptysBio is also developing two other wholly-owned programs — anti-PD-1 agonist antibody ANB030 and anti-BTLA modulator antibody ANB032. While ANB030 is being evaluated in a phase I study for treating inflammatory diseases, the company plans to start an early-stage study to evaluate ANB032 in the first half of 2021 as a potential treatment for inflammatory diseases associated with lymphoid and myeloid immune cell dysregulation. Top-line data from the ongoing ANB030 study is expected in the first half. Based on the outcome, the company may start a phase II study to evaluate the candidate in alopecia areata and vitiligo in the second half of 2021.

The company has also partnered candidates, which are being developed in collaboration with GlaxoSmithKline (GSK - Free Report) and Bristol-Myers Squibb (BMY - Free Report) . AnaptysBio is eligible to receive milestone payments as part of these collaborations.