Wall Street stepped in to buy the dip Tuesday after the Nasdaq closed in correction territory to start the week, down 10% off its recent records. The recently-hard hit pandemic winners such as Tesla (TSLA - Free Report) and Zoom Video (ZM - Free Report) soared, as did Apple (AAPL - Free Report) and countless others.

The tech-heavy index popped 3.7% during regular hours Tuesday, while the S&P 500 popped 1.4%. The climb came after Wall Street decided it was time to buy beaten-down stocks at a discount, even if there is more selling in the near-term.

The market is still trying to determine what impact more government spending and the possibility of a major vaccine-boosted economic comeback might have on inflation. The rising bond yields have also called into question tech valuations. But the pullback has cooled things down and recalibrated some of the fundamentals.

One could also argue that the 10% downturn from the Nasdaq’s mid-February highs was mostly driven by profit taking on stocks that had ripped higher in 2021, following their post-election boom. In fact, the Nasdaq is still up 55% in the last 12 months, despite the recent selloff. 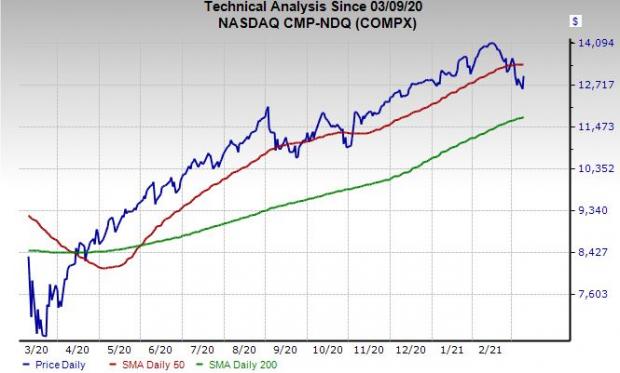 Savvy investors likely used the pullback as an opportunity to buy their favorite stocks at a discount. And long-term investors shouldn’t attempt to time the market precisely because it’s close to impossible.

The last year is a great example of why remaining somewhat exposed at all times and keeping cash on the sidelines is beneficial because it allows one to buy stocks at discounts, as the pullbacks and corrections—which are regular and healthy aspects of the market—occur. And there is no need to sell all of a position in a downturn if you have conviction in its prospects down the road

Tuesday’s moves appear logical for both investors and traders, given that Apple was hovering at November 2020 levels on Monday, while Tesla had fallen over 20% in the first six trading days of March alone.

DT benefits as companies of all stripes invest to advance their digital capabilities, where cloud computing plays a central role. The firm’s ability to modernize and automate cloud operations has attracted clients and Wall Street, with the stock up over 100% since its August 2019 IPO.

DT’s fiscal 2020 revenue climbed 27% and it topped our Q3 FY21 estimates in early February. The company’s revenue popped 28%, with subscription sales up 33% and its adjusted earnings surged 70%. DT’s bottom-line beat helped raise its average EPS beat to 45% over the trailing four periods.

Zacks Estimates call for DT’s fiscal 2021 revenue to jump 28% to $698 million, with FY22 projected to climb another 23%. Meanwhile, its adjusted EPS figure is expected to soar nearly 100% this year to reach $0.61 a share. DT is then expected to improve its bottom-line in fiscal 2022, and its positive earnings revisions help it land a Zacks Rank #2 (Buy) right now.

Dynatrace boasts that it is the only observability platform with a private offering within the Google Cloud Platform (GOOGL - Free Report) , Microsoft Azure (MSFT - Free Report) , and AWS (AMZN - Free Report) marketplace listings. Along with exposure on some of the biggest cloud providers in the world, DT grabs a “B” grade for Growth and 14 of the 19 broker recommendations Zacks has are “Strong Buy,” with none below a “Hold.”

The stock has climbed around 15% in 2021 to crush its industry’s sideways movement. But Dynatrace fell victim to the broader tech selloff, which has it trading about 10% below its February 8 records.

DT hovers near neutral in terms of RSI and it trades right at its one-year median when it comes to forward 12-month sales. And DT popped 6% on Tuesday to jump back above $50 a share.

Pinterest is a social media-style company that enables users to search for products, services, and more to help them do everything from make unique home-cooked meals to figure out how to remodel or decorate a room. PINS has become a hit with advertisers, small businesses, and entrepreneurs. And the coronavirus highlighted the strength of its business model, as people continue to disconnect from traditional media, from linear TV to magazines.

Pinterest has thrived as people shop on Instagram (FB - Free Report) and look for DIY inspiration online. Plus, paid content and ads fit seamlessly into the platform. PINS topped our Q4 estimates in early February and its global monthly active users climbed 37% to 459 million—added over 100 million new users in 2020. Plus, its fourth quarter revenue jumped 76% to help lift its FY20 revenue by 48% to $1.69 billion. This growth came on top of FY19’s 51% sales expansion.

Peeking ahead, Zacks estimates call for Pinterest’s revenue to climb another 46% to reach $2.5 billion, with FY22 expected to jump 35% higher to $3.3 billion. The company’s adjusted earnings are projected to climb by 76% and 32%, respectively over this stretch.

The nearby chart showcases how much its bottom-line estimates have improved since its report, with its FY21 consensus 76% higher and FY22 up 63%. This positivity helps it land a Zacks Rank #2 (Buy) right now

PINS stock has soared 315% in the last year and 95% in the last six months to crush its industry and the tech sector. This impressive run includes a serious pullback from its Feb 16 highs.

In fact, at $67 a share, the stock is still trading about 25% below its recent records despite climbing roughly 8% during regular trading Tuesday. The selloff was likely healthy given its run, as investors took profits. But Wall Street stepped in when it dipped right near the oversold RSI threshold of 30 on Monday.

Pinterest currently trades at 14.9X forward sales. This marks a 33% discount against its own year-long records and a solid discount to fellow high-flyer and social media firm Snap’s (SNAP - Free Report) 19.3X. Similar to DT, 13 of the 19 broker recommendations Zacks has for PINS come in at “Strong Buys.”

Pinterest stands to grow for years to come in a world where people find everything they want online and advertisers and businesses clamor to reach consumers in the subscription age of Netflix (NFLX - Free Report) and beyond. And it is investing in improving its offerings, including beefed up video capabilities.

CrowdStrike is a cloud-focused cybersecurity firm that utilizes machine learning and AI to protect endpoints and cloud workloads. This is crucial in a cloud age that’s full of rapidly expanding endpoints that include laptops, desktops, smartphones, IoT devices, and more.

Remote work and schooling pushed this area of the already-booming cybersecurity space to the forefront. As devices proliferate and our digitally-connected world grows more complex, it becomes more vulnerable.

CrowdStrike completed its roughly $400 million acquisition of Humio on March 5. The company provides high-performance cloud log management and observability technology and the deal is set to “further expand its eXtended Detection and Response (XDR) capabilities by ingesting and correlating data from any log, application or feed to deliver actionable insights and real-time protection.”

CrowdStrike went public in the summer of 2019 and its stock price has skyrocketed 335% in the last year. Luckily for investors who missed out on the ride, CRWD came back to earth amid the wave of selling. The stock surged over 10% on Tuesday to close regular hours at $199 a share, which still puts it about 20% below its mid-February records of $250.

Like with PINs, the stock fell into oversold territory recently and at 43, it is still below neutral RSI levels of 50. The stock’s valuation still shows that it’s a growth play, trading at 31.5X forward sales. But this comes in near its own year-long median and at a 40% discount to its own highs during this stretch.

Investors should know that CRWD is set to release its Q4 FY21 financial results on Tuesday, March 16. Zacks estimates currently call for it to swing from an adjusted loss of -$0.02 a share in the year-ago period to +$0.09 in the fourth quarter on 65% stronger sales.

CrowdStrike’s expected growth would come on top of FY20’s 93% revenue expansion. CRWD grabs a Zacks Rank #2 (Buy) at the moment, and 14 of the 19 brokerage ratings Zacks has are “Strong Buys.” And the pullback might set up a solid entry point for CRWD, which is poised to grow in a world where everything is connected and data is endless.