General Motors (GM - Free Report) recently entered into a partnership with SolidEnergy Systems in a bid to enhance range, reduce costs, and improve energy density of its battery technology. The two companies plan to jointly develop a manufacturing prototyping line in Woburn, MA with the target of producing a high-capacity, pre-production battery by 2023.

GM Ventures, General Motors’ venture capital arm, had invested in SolidEnergy in 2015, marking the beginning of a working relationship between the two companies. Thus, the latest joint development agreement is the next progression of an ongoing collaboration.

Per the Detroit-based auto giant, affordability and range are two major blockades to electric vehicle (EV) adoption by the mass. With the latest partnership with SolidEnergy, General Motors aspires to achieve a once-in-a-generation improvement in energy density and cost of its battery technology and believes the new system could give vehicles a range of up to 450 miles on one charge.

The expected battery energy density increase will enable higher range in a similarly sized battery pack or comparable range in a smaller pack. The weight and space savings from smaller battery packs will help in vehicle light weighting and create more room for additional technology.
Hence, range improvement and cost reduction are the primary objectives behind the joint venture with SolidEnergy. The partnership will aid General Motors to advance its lithium metal battery technology, while incorporating new innovations.

General Motors has an excellent track record and expertise with lithium metal batteries, as evident from 49 patents granted and 45 patents pending. In fact, the automaker’s new prototype lithium metal battery has already logged 150,000 simulated test miles at its Global Technical Center in Warren, MI. SolidEnergy will also bring its own lithium metal intellectual property to the table.

Amid the heightening climate-change concerns, investors are intrigued by automakers that provide green transportation solutions. A shift toward electric future has made it necessary for industry players to reorient their business model and accelerate the EV game. Amid the transforming auto industry, companies like Tesla TSLA, Ford Motor Company F and NIO Inc. NIO are taking considerable strides to provide transportation with zero emissions.

General Motors is also committed to its goal of providing completely carbon-free transportation in the upcoming years and is boosting its electrification efforts to attain the target. The company has always been at the forefront of the automotive revolution and is focused on its vision of an all-electric future. The automaker has committed more than $27 billion to EV and autonomous vehicle development with the goal of launching 30 new EV models by the end of 2025.

In fact, General Motors has been rapidly shifting gears to EVs by working with a list of innovative new companies such as SolidEnergy. Such strategic tie-ups highlight the Detroit automaker's ability to aggressively compete with established EV players and also showcases its pledge to an electric future. It also provides an excellent validation to General Motors’ Hydrotec fuel cell technology and the Ultium battery platform system.

Recently, the automaker also rolled out a new marketing campaign, "Everybody In,” to underscore its commitment and renewed efforts to accelerate the mass adoption of EVs. As part of the campaign, the auto giant also unveiled a new GM logo, meant to amplify the automaker’s renewed commitment to the production and sale of electric vehicles.

The company has adopted an “all-in” electrification strategy, whereby it will build a competitive advantage in batteries, software, vehicle integration, manufacturing and customer experience in order to make EVs key to driving the company’s profitability.

Shares of General Motors have appreciated 35.3% year to date, compared with the industry’s growth of 1.1%. 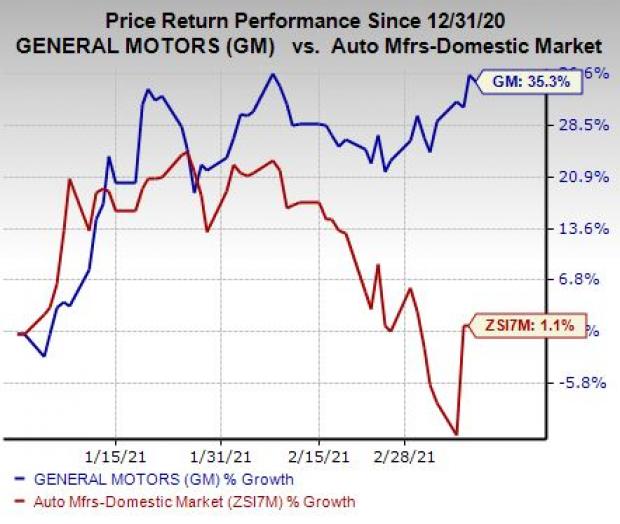 With super high data speed, it will make current cell phones obsolete and unlock the full potential of big data, cloud computing, and artificial intelligence. In the next few years this industry is predicted to create 22 million jobs and a stunning $12.3 trillion in revenue.

Today you have an historic chance to pursue almost unimaginable gains like Microsoft, Netflix, and Apple in their early phases. Zacks has released a Special Report that reveals our . . .

US Economy Recovering Faster Than Expected: Oil Firms to Gain