The deal includes content from News Corp.’s national newspaper, The Australian, as well as the Daily Telegraph in New South Wales, the Herald Sun in Victoria and the Courier-Mail in Queensland.

Moreover, Sky News Australia, a subsidiary of News Corp Australia, reached a new agreement that extends and builds on an existing Facebook agreement.

Markedly, Seven West Media is the only other major Australian media organization to announce a pay deal with Facebook.

This is expected to boost performance of Facebook’s shares, which have returned 1.6% in the year-to-date period compared with the Zacks Internet - Services’ rally of 13% and the S&P 500’s rise of 6%. 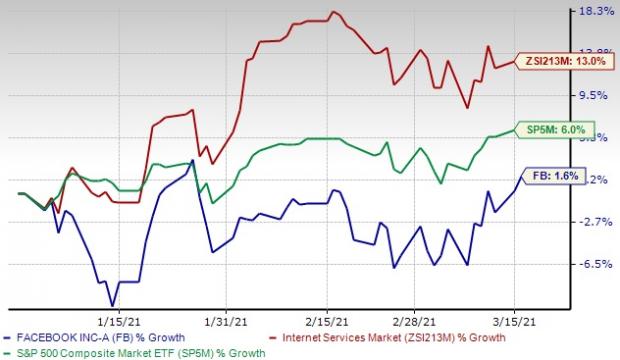 The deal follows an agreement reached in 2019 in which News Corp. publications in the United States received payment for access to stories through Facebook News.

Facebook’s latest deal comes weeks after the Australian government passed the News Media Bargaining Code, which encourages tech giants and news organisations to negotiate payment deals or involve third-party arbitrators to intervene and set the price for them.

News Corp., which owns about two-thirds of Australian metropolitan newspapers, was among the media companies urging the government to make Facebook and Alphabet’s (GOOGL - Free Report) Google pay for their media content and links that drive viewer count and advertising dollars for their platforms.

The deal, which will earn leading publishers millions, will be a financial boost as they have struggled with sluggish advertising revenues and print sales since content has moved online and become available for free, forcing a host of titles to close.

Facebook will also pay mainstream news outlets in the United Kingdom millions of pounds a year to license their articles as the social network faces the threat of a government crackdown on its dominance in online advertising.

Markedly, the Zacks Rank #2 (Buy) company has stated that more than 95% of the traffic Facebook News delivers to publishers is incremental to the traffic they get from News Feed. You can see the complete list of today’s Zacks #1 Rank (Strong Buy) stocks here.

In recent months, Facebook and Google stepped up efforts to help news organizations, following criticism that their dominance of online advertising has made it difficult for media to profit from digital operations.

Last month, News Corp. and Google reached a three-year pay deal in which the search giant will also pay for news in Australia. The company already has a deal with Apple (AAPL - Free Report) to provide access to journalism and related content for a potential audience of millions around the world.

Meanwhile, the EU copyright directive threatens a similar scenario in Europe. In January, Google signed a deal to pay French publishing companies and news agencies for their content. The agreement comes after several months of talks between Google France and the media groups, which are represented by France’s Alliance de la Presse d’Information Generale lobby.

Moreover, Facebook’s director of news partnerships in Europe, Jesper Doub, confirmed that France and Germany were next in line for Facebook News although no launch dates were specified.