GoPro, Inc. (GPRO - Free Report) has launched an updated version of its mobile app — Quik. Available for iOS and Android, the app supports photos and videos from any contemporary phone or camera, including GoPros and DSLRs.

Designed to help people get the most out of their favorite photos and videos, the app represents a huge long-term opportunity for GoPro’s business. The San Mateo, CA-based company has been developing various types of software solutions and hardware to curtail the complexity of managing, editing and sharing content on different media platforms.

GoPro aims to translate healthy momentum in its business, along with controlled costs, into growth and profitability. The company is optimistic about its prospects, mainly on account of the strong demand for its products in end markets. It has enhanced the Plus subscription service through benefits and user awareness.

GoPro is working more closely with its retail partners, both in North America and abroad. The company is making investments in merchandising and retail advertising to drive a bigger brand presence while continuing to innovate. It intends to expand its footprint in emerging markets like India and is focused on scaling its customer relationship management efforts to broaden customer base.

GoPro intends to transform itself from the ‘camera maker’ to ‘content maker’ and has taken significant steps to diversify into higher-margin businesses, including video editing and virtual reality.

GoPro’s shares have surged 219.2% in the past six months compared with 37.1% growth of the industry. 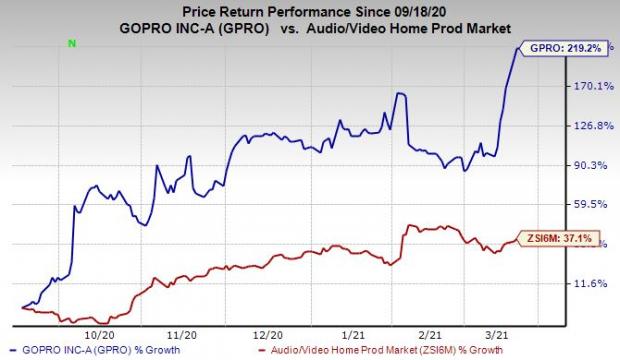 Plantronics delivered a trailing four-quarter earnings surprise of 560.4%, on average.

Ubiquiti delivered a trailing four-quarter earnings surprise of 37.1%, on average.

Raise a Toast to These 5 Stocks on St. Patrick's Day