Hasbro, Inc.’s (HAS - Free Report) Wizards of the Coast division is all set to launch Dungeons & Dragons video game — DARK ALLIANCE — on Jun 22, 2021. Notably, this marks the first launch by the division, following the reorganization of the company on Feb 25, 2021.

With respect to the launch, Chris Cocks, president, Wizards of the Coast, stated, "We're excited to expand beyond the tabletop and deliver a brand new type of D&D experience to long-time fans and new audiences when the game launches this June."

Hasbro has a supreme gaming portfolio and is refining gaming experiences across a multitude of platforms like face-to-face gaming, off-the-board gaming and digital gaming experiences in mobile. Given a strong product lineup and a greater focus on entertainment-backed products, Hasbro’s Licensing segment is poised for growth.

The company stated that it is currently investing in longer-term larger gameplay. Its gaming category, which includes MAGIC: THE GATHERING tabletop, MONOPOLY, DUNGEONS AND DRAGONS and many others, such as THE GAME OF LIFE, JENGA, CONNECT 4 and OPERATION, is performing well. During the fourth quarter, the company not only witnessed solid momentum in the toy and game market but also recorded the fastest point-of-sale growth on Amazon in the U.S. and top European markets.

Going forward, the company intends to launch the mobile version of MAGIC: THE GATHERING Arena by early 2021. It also has Spellslingers in the pipeline that is likely to be launched by Tencent in China. Other products like Peppa Pig and PJ Masks are in the pipeline. 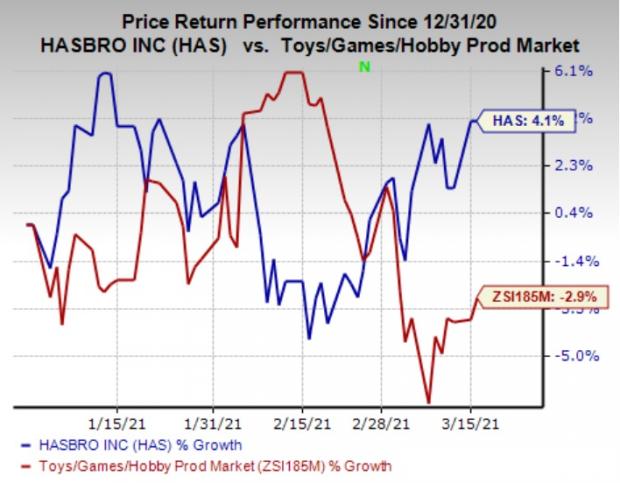 Coming to the price performance, shares of Hasbro have gained 4.1% so far this year against the industry’s 2.9% decline. Notably, the company has been benefiting from new product launches, strategic partnerships and a strong product line-up. This along with an increased focus on the gaming portfolio bodes well for the company.

Moreover, the company stated that it has enough liquidity to survive the pandemic scenario for some time. Meanwhile, earnings estimates for 2021 have moved up over the past 30 days, depicting analysts’ optimism regarding the stock’s growth potential.

Sleep Number has a three-five-year earnings per share growth rate of 12.8%.

JAKKS Pacific has a trailing four-quarter earnings surprise of 11.4%, on average.