China Merchants Bank, known as the nation’s king of retail banking, is the first financial company in China to have allowed a foreign firm to make a strategic investment in its wealth management subsidiary.

In fact, now that foreign firms are also allowed to gain full control of their mutual fund JVs in China, more than 40 such companies have set up JVs in the nation and a few have applied for greater control.

China Merchants Bank stated, “The investment would deepen the cooperation between the bank and the strategic investor and is good for CMB Wealth Management to enhance its internal governance.”

Notably, as part of its four-year investment plan in China, JPMorgan has decided to get full ownership of all of its mainland China operations by the end of this year.

In the second half of 2020, the Wall Street biggie raised its stake in its China securities JV to 71%, which came after the bank purchased a 20% stake in the JV from one of the local partners — Shanghai Waigaoqiao FTZ — for 177.7 million yuan ($26 million).

Moreover, the bank has already obtained full control of its futures JV in China, J.P.Morgan Futures Co., after receiving regulatory approval from the China Securities Regulatory Commission to increase the stake to 100% from 49%.

Moves by Other Firms to Expand in China

Firms like Goldman Sachs (GS - Free Report) , Nomura Holdings, Morgan Stanley (MS - Free Report) and UBS Group have either won approval or are waiting for the same to increase stakes in their respective JVs in China.

JPMorgan’s initiatives to expand branch network in new markets are expected to continue supporting profitability. Its inorganic expansion strategy along with a strong mortgage banking business is likely to aid growth.

Shares of JPMorgan have gained 67.3% over the past six months compared with 66.8% growth recorded by the industry. 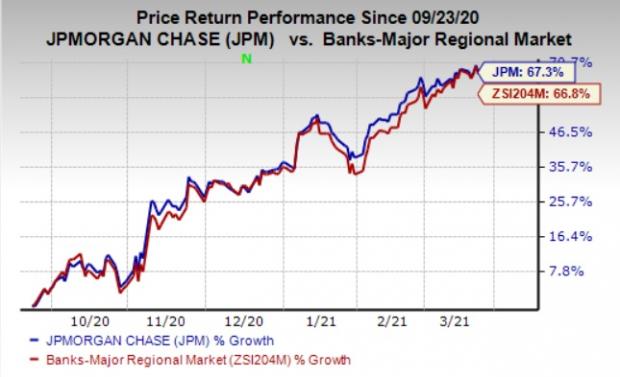