Huntington Ingalls Industries, Inc.’s (HII - Free Report) business unit, Newport News, recently secured a modification contract for continued execution of engineered overhaul for the fiscal 2018 USS Columbus (SSN 762), a nuclear-powered attack submarine. Work related to the deal will be performed in Newport News, VA, and is expected to be completed by November 2022.

Valued at $194.5 million, the contract has been awarded by the Naval Sea Systems Command, Washington, D.C.

Huntington Ingalls, through its Newport News unit, operates as one of the two companies currently designing and building nuclear-powered submarines for the U.S. Navy. Naturally, this gives the company a dominant position in the submarine industry, with the United States being a stalwart in the global defense space.

Consequently, its Newport News unit frequently witnesses a solid flow of contracts from Pentagon involving submarine constructions along with associated repair and overhaul service like the latest contract. These contract wins in turn boost this unit’s revenue performance. Evidently, in the fourth quarter of 2020 revenues of this unit amounted to $1.75 billion, reflecting an increase of 25.1% year over year, primarily led by higher volumes in submarine constructions.

Lately, the company has been making notable progress in its submarine programs, which should further boost growth of the Newport News unit. As of Dec 31, 2020, Huntington Ingalls’ SSN 794 Montana is approximately 91% complete and scheduled for delivery in late 2021. SSN 796 New Jersey achieved the pressure hull complete and is approximately 72% complete.

Such innovations should usher in more contracts for the Newport News unit in the coming days.

Per the Research and Markets firm, the global submarine market is expected to see a 4% CAGR from 2020 to 2025. This indicates increased demand for different variants of submarines and their associated services, including the Columbia and Virginia-class submarines. As submarines are a vital part of the U.S. navy fleet, Huntington Ingalls is likely to benefit. These trends should also benefit other submarine makers like General Dynamics (GD - Free Report) , BAE Systems Plc (BAESY - Free Report) and MitsuBishi Heavy Industries (MHVYF - Free Report) , globally.

In the past year, Huntington Ingalls, carrying a Zacks Rank #3 (Hold), has gained 9.4% compared with the industry’s 26.1% surge. 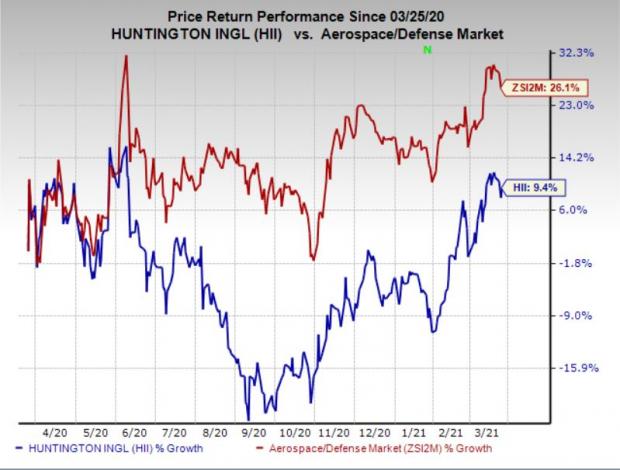