Work locations for the entire task will be determined with each order.

A Brief Note on MLRS

In May 2019, Lockheed won a contract to develop new modular pods for GMLRS rockets. Through these new pods, the company aims at improving reload operations and ensuring that warfighters have adequate rounds available to them when they are most needed. We believe the latest contract win hints at enhanced development of MLRS family of munitions and expect further progress in the coming days.

In recent times, the importance of missile defense systems in the U.S. aerospace-defense market has gained significant traction. This upside can be attributed to advancements and integration of new tactical features followed by improved markets for cruise missiles, ballistic missiles, air to air missile, directed energy weapons and anti-satellite weapons. With Lockheed Martin being a prominent missile developer and the Pentagon’s largest defense contractor, increasing demand for missiles has been resulting in significantly higher inflow of contracts.

This in turn has resulted in revenues at the company’s MFC segment to improve significantly. Notably, the MFC unit recorded 4% revenue growth in the fourth quarter of 2020. Moving ahead, we expect this business segment to deliver similar top-line performance, based on consistent order flows from the Pentagon like the latest one.

Per a report by Mordor Intelligence, the global Missiles and Missile Defense Systems (MMDS) market value is projected to see a CAGR of over 10% during 2021-2026 time period. The uptick is likely to be driven by growing conflicts between various countries and the increasing number of investments on missile defense systems being made by different countries worldwide, along with rapid technological advancements.

In a year’s time, shares of Lockheed Martin have gained 9.9% compared with the industry’s 26% surge. 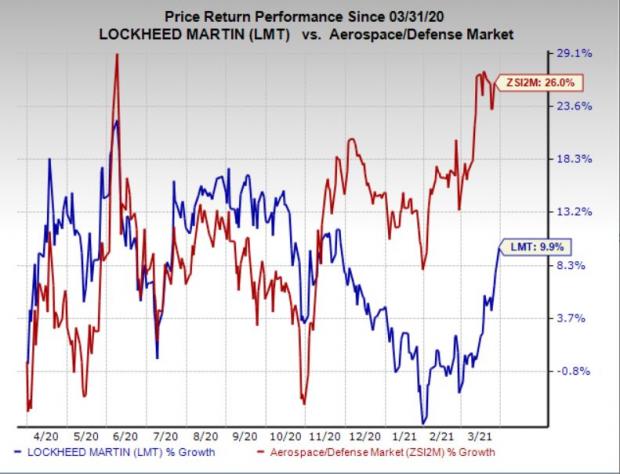