AbbVie (ABBV - Free Report) announced that the FDA has extended the review period for a supplemental new drug application (sNDA) for its JAK-inhibitor drug, Rinvoq (upadacitinib), by three months. The sNDA is seeking label expansion of Rinvoq for treating moderate-to-severe atopic dermatitis patients. A decision from the FDA is now expected during early third quarter.

Previously, the FDA had requested the company to provide updated data on the benefit-risk profile of Rinvoq in atopic dermatitis. The company submitted the requested data, following which the regulatory authority decided to extend the review period for the sNDA for the full review of the data.

Last month, review of another sNDA seeking label expansion of Rinvoq in active psoriatic arthritis was also delayed by three months. The delay was due to similar reason.

AbbVie’s shares have increased 1.3% so far this year against the industry’s 0.5% decline. 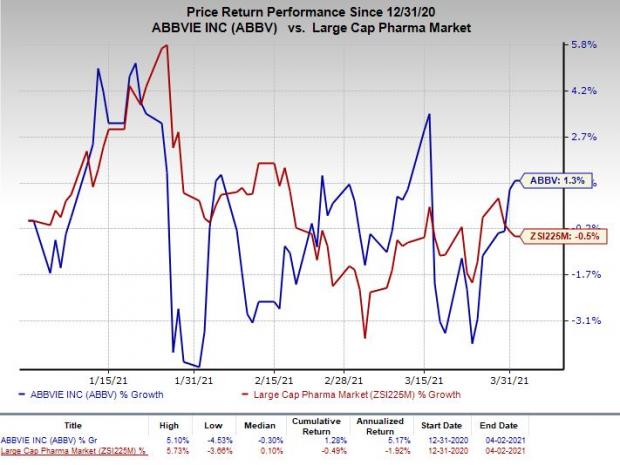 The extension of review period for two sNDAs for Rinvoq within a month gives fuel to curiosity of some analysts that the requirement for additional safety data on Rinvoq might not be drug-specific but may be related to the JAK inhibitors class of drugs, the. The FDA issued a statement recently related to another JAK inhibitor, Pfizer’s (PFE - Free Report) Xeljanz, that stated that the drug may increase the risk of heart-related problems and cancer. The statement was based on data from a study that compared the drug to another class of drugs — tumor necrosis factor (TNF) inhibitors.

Some analysts are of the opinion that the FDA requested additional safety data on Rinvoq followed by extension of review period to verify whether Rinvoq shares risks similar to Xeljanz as well as other risks.

However, the drug’s label includes warnings about serious infections, including blood clots and cancer. A FDA decision to include strict warnings for serious health hazards in the anticipated label for psoriatic arthritis is likely to hamper the drug’s prospects.

In addition to Rinvoq, AbbVie’s another new drug Skyrizi hold the potential to become alternatives to its major revenue generating drug, Humira., which is set to face generic competition in the United States, beginning 2023. In the EU, several biosimilars of Humira have already been unveiled by companies, including Amgen (AMGN - Free Report) and Biogen (BIIB - Free Report) , which significantly lowered the international sales of Humira. A similar scenario in the United States beyond 2023 will significantly dent AbbVie’s revenues. Successful developments of Rinvoq and Skyrizi in ongoing clinical studies, followed by potential label expansions and continued demand in launched indications will be key to AbbVie’s long-term growth, as these drugs can offset the loss of Humira sales, going forward.