Enphase Energy, Inc. (ENPH - Free Report) has recently announced the expansion of its Enphase Installer Network (EIN) in Europe, by launching the network in the Netherlands and Belgium. Going forward in 2021, the company plans to expand the network to more European countries. Prior to the entry in the Netherlands and Belgium, the company made successful launches of its EIN in the United States and Australia in 2020.

Benefits of the EIN

As part of the ongoing digital transformation at Enphase Energy, the EIN is backed by significant enhancements to the installer-facing functionality of the Enphase Enlighten platform. The digital components available to EIN members combine analytics with business growth tools, customer-support enhancements and services, which will enable installers to deliver enhanced customer experience over the lifespan of their solar systems and improve business efficiency and profits. Homeowners in the Netherlands and Belgium can easily locate an EIN installer within their area using the company's tools.

Enphase’s Prospects in the Netherlands and Belgium

Solar markets in the Netherlands and Belgium are booming at a significant pace, which is drawing the attention of solar power manufacturers across the globe. Per a report by PV Magazine, the solar market in the Netherlands grew 40% year on year in 2020, courtesy of a 2.93 GW of newly deployed capacity that pushed the country’s cumulative figure to more than 10.11 GW. Meanwhile, according to the Netherlands Environmental Assessment Agency, the country could see a rise to 36 GW of installed solar power by 2030, which promises enough scope for growth for solar manufacturers. Being a prominent microinverter supplier in the global solar space, Enphase Energy’s products are frequently preferred by countries across the world, and nations such as the Netherlands and Belgium are no exception.

Evidently, in September 2020, Enphase Energy entered strategic partnerships with three solar distribution companies in Belgium and the Netherlands to distribute the Enphase IQ 7 family of microinverters to residential installers across both nations. The partnerships with Carbomat Group, Libra Energy and Solarclarity were inked to further strengthen Enphase Energy’s presence in the European solar market.

Prior to this development, Enphase Energy teamed up with Sunlogics in April 2020, a residential solar installer that delivers custom-made solar solutions to customers in Belgium. Furthermore, in January, Enphase Energy completed a commercial solar project with Teslandi.pro, a Dutch solar installer that delivers custom-made solutions for energy generation and storage.

Other Solar Players Operating in the European Market

Alongside Enphase Energy, ReneSola (SOL - Free Report) , SolarEdge Technologies (SEDG - Free Report) and Jinko Solar (JKS - Free Report) are other solar players that have already set foot in Europe’s solar market, including the Netherlands and Belgium, and are expected to benefit from the market’s boom.

In June 2020, Renesola announced its participation in a consortium led by French power producer, Tenergie. The consortium looks to develop a large-scale ground-mounted solar plant in the south of France, which is expected to produce and supply 46 GWh of electricity to approximately 10,000 households per year. Prior to that, SolarEdge Technologies signed a contract with Enfindus in February 2020 to supply inverters and power optimizers intended for commercial and industrial (C&I) rooftop PV systems, for 1 GW of solar projects. In December 2019, 40 MW of Jinko Solar’s high-efficiency Cheetah HC 60 solar modules was installed for the Almelo project in the Netherlands.

Shares of Enphase Energy, a Zacks Rank #2 (Buy) company, have skyrocketed 302.3% in the past year, outperforming the industry’s growth of 158.9%. You can see the complete list of today’s Zacks #1 Rank (Strong Buy) stocks here. 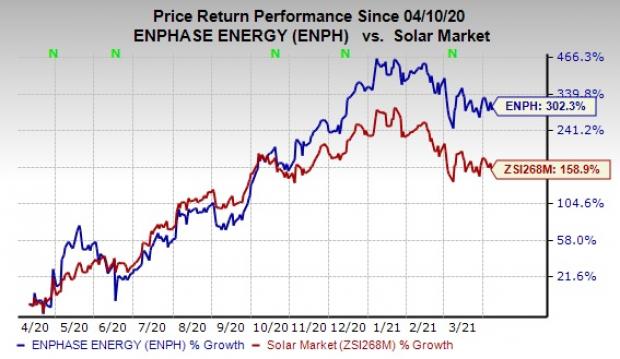