For investors’ note, an infusion set is a tubing that delivers insulin from the pump to the body and ideally requires a set change every few days.

It is to be noted that the Medtronic Extended infusion set will be available in other European countries via a phased approach during 2021. However, the infusion set is for investigational use only and has not been approved for sale or distribution in the United States.

The Medtronic Extended infusion set with a longer wearability enables diabetics to safely stay on insulin pump therapy with fewer interruptions and insertions unlike the previous infusion sets. At the same time, the set brings a certain amount of convenience and comfort to their diabetes management routine. Notably, the set is compatible with all MiniMed 600 and 700 series insulin pumps offered by Medtronic.

The Medtronic Extended infusion set comes with the Medtronic Extended reservoir which is also tested and approved to keep insulin stable and safe for use up to seven days. Per management, the latest innovation is expected to simplify diabetes management, thereby enhancing the experience for patients suffering from different categories of diabetes.

Per a report by Research And Markets, the global insulin infusion pump market is expected to grow by a CAGR of approximately 7.5% between 2019 and 2024. Factors like user convenience and lower risk of a fall in glucose levels are expected to drive the market.

Given the market potential, the commercial availability in select European countries, with more countries to follow, is expected to significantly strengthen Medtronic’s foothold in the diabetes business.

Medtronic has witnessed a few notable developments in this business arm over the past few months.

Per the third-quarter fiscal 2021 earnings release in February, the company confirmed registering robust revenue growth despite the pandemic-led challenging business environment. This primarily resulted from mid-single digit growth in durable pumps and Continuous Glucose Monitoring (“CGM”) due to the launch of MiniMed 780G in international markets and the MiniMed 770G launch in the United States.

In the same month, the company launched its InPen integrated with real-time Guardian Connect CGM data. Notably, InPen is the first and only FDA-cleared smart insulin pen currently available in the market for people on multiple daily injections. 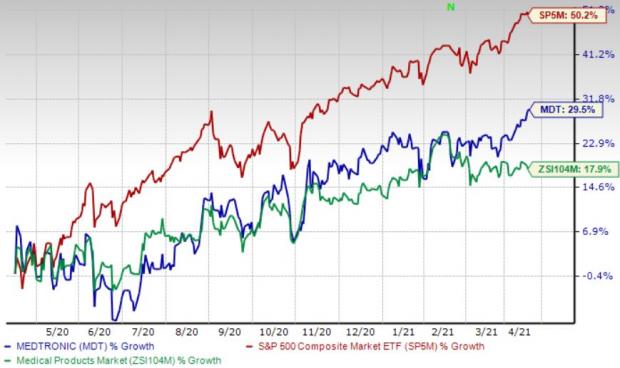