Shares of the company declined more than 12% during the close of the trading session on Apr 14. This might be due to sluggish traffic during the holiday season due to the pandemic-led store closures. We note that the stock has rallied 38.1% year to date, outperforming the industry’s 6.8% growth.

Bed Bath & Beyond reported adjusted earnings of 40 cents per share for the fiscal fourth quarter, up 5.3% year over year. Further, the figure exceeded the Zacks Consensus Estimate of 27 cents. This uptick was mainly attributed to improved margins and lower expenses.

Net sales were $2,619 million, down 16% year over year due to the sale of non-core businesses and store closures. Moreover, it surpassed the Zacks Consensus Estimate of $2,613 million. Further, in-store sales fell 27% in the reported quarter.

Meanwhile, digital sales rose roughly 86% in the quarter. Several omni-channel services, such as Buy-Online-Pick-Up-In-Store and Curbside Pickup, contributed to digital sales growth. Notably, the company witnessed 3.1 million new customers in the digital space, with more than 300 million visitors on its online platforms. Also, the mobile channel accounted for more than half of its digital sales in the fiscal fourth quarter. Its mobile app was downloaded more than 21 million times, with the buybuy BABY mobile app being downloaded 150,000 times.

With roughly 87% of orders ready for pick up within two hours, BOPIS now accounts for 14% of digital sales in the quarter under review. Also, stores fulfilled 41% of digital sales, out of which 17% were BOPIS orders. Apart from these, its newly launched same-day delivery service is gaining traction with more than 220,00 same-day delivery orders in the fiscal fourth quarter. Out of these, 78% of orders came from websites while the rest were from Shipt and Instacart. Encouragingly, management launched Harmon Face Values on Instacart with the added benefit of same-day delivery for healthy and personal care products.

During the quarter, total enterprise comparable sales (comps) grew 4% year over year, marking the third successive quarter of comps growth. The metric gained from strength in the Bed Bath & Beyond banner and strong digital comps. However, comparable store sales fell 20% year over year.

Further, the company incurred an operating loss of $23.7 million compared with a loss of $81.2 million in the year-ago quarter. 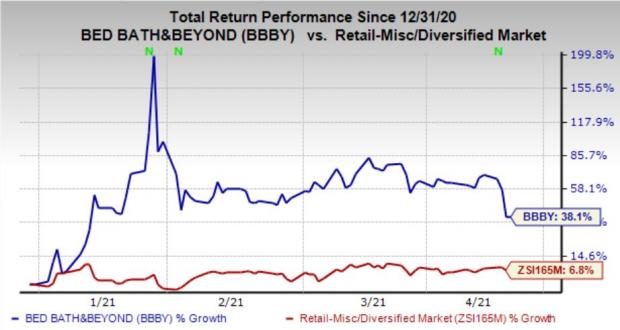 Bed Bath & Beyond ended the fiscal fourth quarter with cash and investments of roughly $1,353 billion. Long-term debt totaled $1,190.4 million and total shareholders' equity was $1,276.9 million as of Feb 27, 2021. In the quarter, cash provided by operating activities came in at $75.7 million along with nearly $66 million in capital expenditures.

That said, management boasts liquidity of nearly $2.1 billion, driven by a free cash flow of $62 million.

Further, the total share repurchase program has been raised to $1 billion, up from $825 million announced earlier. The company now intends to repurchase shares worth $325 million, an increase from $300 million guided earlier. Also, capital expenditures for fiscal 2021 are likely to be $400 million.

Management noted that its non-core portfolio sale is complete. As a result, it retained its fiscal 2021 view. The company still expects net sales to be $8-$8.2 billion along with flat total enterprise comps year over year. It continues to anticipate adjusted EBITDA of $500-$525 million. Moreover, adjusted gross margin is likely to be roughly 35%, with adjusted SG&A expenses of nearly 31%. Apart from these, Bed Bath & Beyond envisions in-store traffic to improve in fiscal 2021.

However, fiscal 2021 remains exposed to threats related to COVID-19 such as uncertainty surrounding vaccine rollouts, changes in consumer demand and shopping behavior, which in turn might affect store traffic and online sales. Also, higher freight costs remain a concern.

For first-quarter fiscal 2021, Bed Bath & Beyond expects net sales to grow more than 40% year over year. Also, gross margin is likely to improve on a sequential basis to the tune of 34%. Adjusted EBITDA is forecasted to be $80-$90 million.

Further, the company intends to invest roughly $250 million to remodel nearly 450 stores over the next three years. Keeping in these lines, 130-150 stores are likely to be remodeled in fiscal 2021, with 26 stores in the fiscal first quarter itself.

Stocks in the Retail Space

L Brands currently has a long-term expected earnings growth rate of 13% and a Zacks Rank #1.