Canadian Solar (CSIQ - Free Report) announced that it has started mass production of monofacial HiKu7 and bifacial BiHiKu7 high-efficiency solar modules, which are based on 210 mm cells and have power output capacity of 665 watt (W). The new modules will reduce the cost of installation and operation of solar projects compared with mainstream 445 W modules.

The company intends to touch HiKu7 and BiHiKu7 modules production capacity of 10 gigawatt (GW) by 2021-end, out of which a significant portion has already been booked. Canadian Solar will start delivering the first batch of high-quality modules from factories by the end of this month.

Canadian Solar has one of the world’s largest utility-scale solar project development platforms, with a track record of bringing more than 5.7 GW of solar power plants into commercial operation across six continents, as of Dec 31, 2020.

Utilities across the globe are now focused on reducing carbon emissions from the electricity generation process. As a consequence, utility operators are using natural gas and renewal alternate energy sources to produce electricity. Popularity of solar energy is increasing as most countries across the globe receive a few hours of sunlight on a daily basis.

Development of high-quality advanced solar modules is making solar projects viable. Per the U.S. Energy Information Administration’s finding, utility operators in the United States are expected to add utility-scale solar capacity of 15.8 GW in 2021 and 14.9 GW in 2022, after adding 10.4 GW in 2020.

Per International Energy Agency, higher usage of solar energy in major markets like United States, China and the European Union will result in average annual solar PV addition of 125 GW in the 2021-2025 time frame.

In the past six months, shares of the company have outperformed the industry. 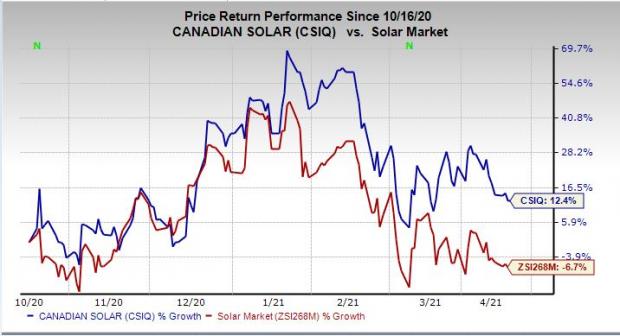