Why You Should Hold AngioDynamics (ANGO) in Your Portfolio

AngioDynamics, Inc. (ANGO - Free Report) is well poised for growth on a solid momentum across NnoKnife portfolio and its progress with DIRECT study. However, tough competition is persistently offsetting these positives.

Shares of AngioDynamics have gained 29.5% against the industry’s decline of 3.2% in the past three months.

The company with a market capitalization of $924.1 million designs, manufactures and sells a wide range of medical, surgical and diagnostic devices. It anticipates an earnings improvement of 140% from the fiscal 2022 level. Moreover, its bottom line beat estimates in each of the trailing four quarters, the average being 107.5%.

NanoKnife Driving Growth : In the third quarter of fiscal 2021, the company saw strong NanoKnife probe sales in the United States, particularly mitigating softness in the international markets. This consistent uptrend in the United States is being primarily driven by the company’s increased capital base and an enhanced awareness raised by the DIRECT study. NanoKnife disposable sales in the country grew 12% year over year in the fiscal third quarter. The company continued benefiting from the larger installed base of NanoKnife units in the quarter. Management expects probe sales to continue in the United States and ultimately in the international geographies as market pressures subside and procedure volumes bounce back.

FDA Nod for DIRECT Study: Earlier, management had announced that the company received an approval from the FDA to initiate a clinical study for treating stage III pancreatic cancer. The approval is for an investigational device exemption (IDE) application for NanoKnife Irreversible Electroporation “Direct IRE Cancer Treatment” clinical study (DIRECT).The company’s PATHFINDER and DIRECT studies continue to remain the primary focus and activity in these two studies continued to improve through the fiscal third quarter. With regard tothe PATHFINDER I study, the company completed enrollment and exceeded 100 enrolled patients during the fiscal third quarter. By the end of the same period, 22 DIRECT study sites had secured an Institutional Review Board (IRB) approval. 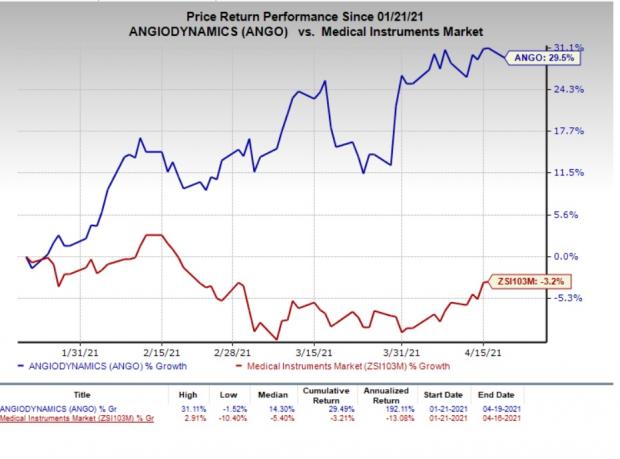 However, there is a factor denting growth.

The company faces stiff rivalry from the device makers like Boston Scientific, Becton, Dickinson & Company and Merit Medical. Moreover, despite being able to sell off a bulk of its manufactured products, pricing pressure from group purchasing organization (GPO) contracts could adversely impact the selling prices and the corresponding profitability of the company.

For fiscal 2021, the Zacks Consensus Estimate for revenues is pegged at $266.7 million, indicating a rise of 8.5% from the prior-year reported number. The same for earnings stands at 5 cents per share, suggesting a fall of 4.4% from the year-ago reported figure.

Intuitive Surgical has a projected long-term earnings growth rate of 8.5%.

The Cooper Companies has a projected long-term earnings growth rate of 11%.

Veeva has an estimated long-term earnings growth rate of 14.5%.