Cadence (CDNS) to Report Q1 Earnings: What's in the Offing?

For the March quarter, Cadence expects total revenues in the range of $710-$730 million. The Zacks Consensus Estimate for revenues is currently pegged at $718.62 million, indicating 16.3% growth from the prior-year quarter’s reported number.

Management projected non-GAAP earnings to be 72-76 cents per share. The consensus mark for first-quarter earnings has been steady at 74 cents over the past 30 days, suggesting an improvement of 23.3% from the prior-year quarter’s reported figure.

Notably, the company’s earnings beat estimates in each of the trailing four quarters, the average being 15.86%.

Cadence’s first-quarter top line is likely to have gained from a solid momentum of Palladium Z1, Clarity 3D Solver and CloudBurst Platform offerings. A strong pipeline of its digital & signoff, custom & analog and IP solutions as well as an improving backlog despite COVID-related headwinds is expected to have aided the company’s performance.

This apart, the growing popularity of products comprising Protium X1, Spectre X, Smart JasperGold and Tensilica Vision Q7 is expected to have contributed to the company’s performance in the to-be-reported quarter.

An expanding customer base is raising investor optimism on the stock. Shares of Cadence have gained 90.3% in the past year, significantly outperforming the industry’s rally of 54.1%. 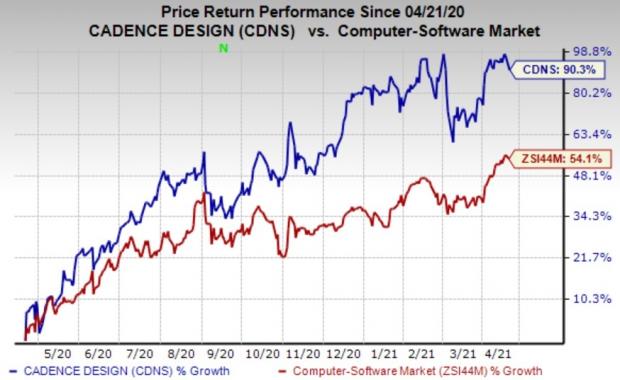 Additionally, evolution of semiconductor manufacturing processes from 10 nm (nanometer) to 7 nm and even 5 nm technology is expected to have increased adoption and driven the company’s first-quarter performance.

Further, a solid uptick in chip design activity, increasing system design complexity and high cost of failure are expected to have bolstered demand for Cadence’s system design and verification solutions among semiconductor companies in the to-be-reported quarter.

The aforementioned product rollouts and deal wins are expected to have expanded this currently Zacks Rank #1 (Strong Buy) player’s business avenues, which in turn, might have boosted its first-quarter top line. You can see the complete list of today’s Zacks #1 Rank stocks here.

Nevertheless, coronavirus-induced economic downturn might have induced limited spending from semiconductor companies on software simulation solutions, which remains a concern.

Notably, during the quarter under review, Cadence concluded the buyout of NUMECA International with an aim to enhance CFD, mesh generation, multi-physics simulation and optimization capabilities. With this acquisition, the company is looking forward to addressing the high-growth computational fluid dynamics (CFD) market segment with an estimated TAM of $1.6 billion.

Although increasing expenses on product development and M&A activity augur well for the longer haul, the same is likely to have hindered the company’s first-quarter profitability. Further, stiff competition from peers like Synopsys (SNPS - Free Report) and ANSYS (ANSS - Free Report) might have impeded its margin expansion in the first quarter.