Eni SPA (E - Free Report) is planning to spin off the oil and gas assets in West Africa and the Middle East into a combined business as part of plans toreduce debt and support low-carbon as well as other energy transition activities, per Reuters.

The move is part of a major revamp that Eni initiated in 2020 as it shifts to renewables, while downsizing its oil and gas output. Notably, the company plans to recreate its decision to spin off its oil and gas assets in Norway, where it formed a joint venture — Var Energi.

Eni plans to combine its retail and renewable energy businesses into one of the biggest clean retail players in Europe, which would double its core earnings to $1.2 billion in 2024. Notably, the merged business is estimated to be worth $11.9 billion.

Per Reuters, creating a separate entity would allow Eni to raise €2-€3 billion in its renewable business and double its trading multiples. Eni would use 45% of its renewable power to serve customers and help meet its Scope 3 targets, which include emissions from all products sold. Moreover, it will enable the company to increase its retail base to 15 million customers by 2030.

Per sources, Eni decided to spin off its businesses as the shift to renewable energy stocks has increased dramatically over the past few years. Meanwhile, oil stocks fell sharply as investors have been voicing concerns over the role of such companies in sustainability amid the pandemic.

The spinoff will enable the company to partly eliminate debt from its balance sheet, which increased to $32.2 billion in 2020. Notably, this is expected to allow Eni to raise the capital necessary to develop renewable and low-carbon projects.

Eni recently engaged in negotiations with fellow oil and gas producers, including BP plc (BP - Free Report) and TOTAL SE (TOT - Free Report) , regarding the possibility of merging parts of their assets in West Africa and the Middle East. However, the outcome of the negotiations remains uncertain.

Shares of the company have outperformed the industry in the past six months. The stock has gained 62.2% compared with the industry’s 48.9% growth. 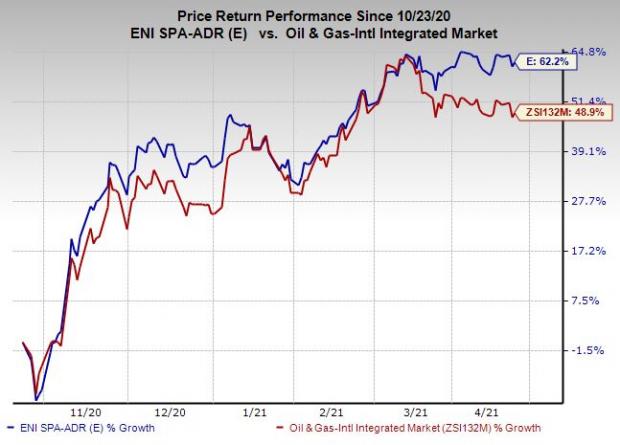