Net revenues of $3.02 billion surpassed the Zacks Consensus Estimate of $2.97 billion. Further, the figure increased 42% from the year-ago quarter on a reported basis and 38% on a FX-neutral basis. Also, the figure rose 5.4% sequentially.

Year-over-year growth in the top line was primarily driven by solid momentum across the Marketplace platform. Further, accelerating gross merchandise volume (“GMV”) of the company contributed significantly to the performance.

Additionally, the growing adoption of its managed payments remained a major positive. The number of sellers migrated to managed payments exceeded 4 million in the reported quarter, out of which more than 80% was done in the United States. Notably, managed payment offering processed 52% of on-platform volumes globally in the first quarter.

Further, eBay’s Promoted Listings delivered robust performance by generating revenues of $224 million, which grew 64% on a reported basis and 58% on a FX-neutral basis from the prior-year quarter.

Additionally, the company witnessed year-over-year growth of 7% in the active buyer base, which stood at 187 million at the end of the first quarter. Notably, strong momentum across new and reactivated customers was a tailwind.

Coming to the price performance, eBay has returned 40% over a year, outperforming the industry’s growth of 11.9%. 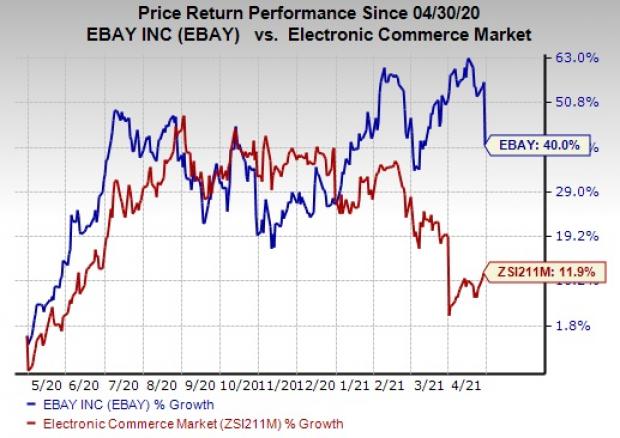 The company’s total GMV of $27.5 billion in the reported quarter exhibited year-over-year growth of 29% and 24% on a reported and a FX-neutral basis, respectively. Further, the figure surpassed the Zacks Consensus Estimate of $26.2 billion.

Notably, eBay’s GMV is entirely generated by the Marketplace platform after the sale of StubHub.

Marketing Services and Other: eBay generated $291 million of total marketing services and other revenues (9.6% of total revenues), which was up 27% from the year-ago quarter.

Operating expenses of $1.4 billion contracted 500 bps as a percentage of net revenues from the year-ago quarter.

Non-GAAP operating margin was 33% in the first quarter, expanding 140 bps year over year.

The company generated $1.04 billion of cash from operating activities in the first quarter, up from $758 million in the previous quarter.

Its free cash flow stood at $855million in the reported quarter.

Further, the company repurchased $292 million worth of shares and paid out dividends of $122 million in the reported quarter.

For second-quarter 2021, eBay expects net revenues of $2.98-$3.03 billion. On a FX-neutral basis, year-over-year growth in revenues is anticipated to be 8-10%. The Zacks Consensus Estimate for revenues is pegged at $2.93 billion.

Non-GAAP earnings are anticipated to be 91-96 cents per share. Notably, the Zacks Consensus Estimate for the same is pegged at $1.00 per share.

Alpha and Omega's (AOSL) Q3 Earnings: What's in the Store?