3 Stocks to Buy in May For Economic Reopening Growth

Nearly all of the technology heavyweights from Apple (AAPL - Free Report) to Amazon (AMZN - Free Report) posted blowout first quarter results during the last week of April. Wall Street’s response to the show of strength has been largely muted, highlighting a combination of high expectations, already-impressive runs over the last year, and the possibility of tech deceleration ahead.

The technology titans remain safe long-term bets. However, given their outsized climbs off the coronavirus lows and the possibility of a sustained economic boom for the next several years, investors might want to consider stocks that are poised to benefit from pent-up consumer demand and the broader reopening (also read: Are Big Tech's Best Growth Days Behind It).

For instance, U.S. GDP jumped by a seasonally adjusted annual rate of 6.4% in the first quarter, to put the economy within 1% of its pre-pandemic levels, according to new Commerce Department data.

The consumer-focused U.S. economy was boosted by a big uptick in spending, driven by a record 21% jump in household income in March. The latest round of stimulus checks fueled the rise and propelled a 4.2% month-over-month pop in spending, the biggest since last summer.

The largely successful vaccine rollout in the U.S., coupled with a natural economic rebound, and the injection of trillions of dollars into the economy has pushed up 2021 U.S. GDP projections to over 6%, which would be the strongest in roughly 35 years.

With this backdrop, it’s time to explore three stocks that investors might want to buy in order to play the economic reopening…

Darden is a dine-in restaurant chain standout, with brands from Olive Garden and LongHorn Steakhouse to Yard House and The Capital Grille. The company’s portfolio includes over 1,800 restaurants and it’s poised for a rebound as consumers return to indoor dining.

DRI’s sales have tumbled in four straight quarters, including a 26% drop for the three-month period (Q3 FY21) ended in February. But the company’s positive outlook helped the stock surge after its March 25 release.

Zacks estimates call for a big comeback, with its fourth quarter revenue projected to soar 67% from the year-ago period to $2.12 billion. This top-line expansion is projected to help it swing from an adjusted loss of -$1.24 a share to +$1.71 per share. Darden’s fiscal 2021 revenue is still expected to dip 9%, even though its adjusted earnings are projected to pop 27%

The floodgates now appear open for a major boom at the sit-down chain power, with its FY22 revenue projected to soar 30% to $9.12 billion. This would mark by far its largest growth as a public firm—went public in the mid-1990s—and see it climb well above its pre-pandemic levels of $8.5 billion. This excepted top-line expansion is projected to boost its adjusted FY22 earnings by 78% to $7.04 a share.

Darden’s consensus earnings estimates climbed significantly since its last report to help it land a Zacks Rank #1 (Strong Buy). DRI has easily topped our bottom-line estimates in the trailing four periods, as part of a much longer string of beats. The company is also part of an industry that’s in the top half of our over 250 Zacks industries, and 15 of the 22 brokerage recommendations Zacks has are either “Strong Buys” or “Buys,” with the remaining ratings at a “Hold.”

The nearby chart highlights DRI’s comeback from its coronavirus downturn, with the stock up over 175% since the end of March to crush its industry’s 70% average and fellow industry standouts such as Chipotle (CMG - Free Report) . Darden has now jumped 160% in the last five years to outpace the S&P 500’s 135% climb. Despite its climb, DRI comes in below overbought RSI levels (70) at around 58.

Darden has cooled down somewhat in the last month, but at around $146 a share it sits right near its all-time highs. This makes the fact that it’s trading at a 45% discount to its own year-long highs in terms of forward earnings all the more impressive. At 21.5X forward 12-month earnings, DRI also trades at a 30% discount to its industry’s average. Plus, DRI raised its dividend last quarter and it authorized a new $500 million repurchase program.

The historic denim firm beat Zacks adjusted Q1 earnings estimate by 41% on April 8, with an average beat of 54% in the trailing four periods. Levi Strauss revenue did still slip by 13%, but its guidance finally shows a return to growth that could be boosted by the economic reopening, as people find a reason to look their best again.

Levi’s denim brand has been an industry leader for decades and today it sells various offerings for men, women, and kids around the world, under its namesake brand, Dockers, and others. Levi returned to the public markets in 2019 and it spent much of the last year improving its digital businesses.

More importantly, executives are focused on diversifying beyond denim bottoms to adapt to changing fashion habits “In 2015, our tops business represented 11% of our total business. In 2020, it was 21% of revenues,” CEO Chip Bergh said on its Q4 earnings call.

The company’s chief executive said Levi expects half of its revenues to come from “products that are not denim bottoms” over the next decade. Investors should also remember that nothing is forever in the always-cyclical fashion industry. Therefore, the athleisure craze could be due for a slowdown. Levi’s price chart over the past year illuminates that Wall Street might be anticipating this shift, with the stock up 45% in 2021 vs. Lululemon’s (LULU - Free Report) 4% decline.

LEVI shares have popped over 15% since its first quarter report and they closed regular trading Friday at roughly $29, just below their records. The stock’s small pullback recently has pushed it below overbought RSI levels to 63. The stock also trades at a slight discount to its highly-ranked Retail-Apparel and Shoes industry at 24.3X forward earnings vs. 25.4X. And Levi management raised its dividend for the second quarter. 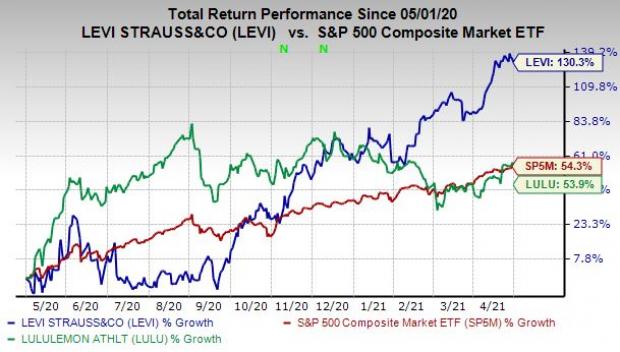 Along with expanding its non-denim business, Levi is working to boost its exposure at the modern retail titans. This includes a beefed-up deal with Target (TGT - Free Report) that features a lifestyle collection that ranges from home goods to and pet supplies. And the pent-up demand and economic stimulus could benefit Levi as people can afford to revamp their wardrobes.

Zacks estimates call for Levi’s Q2 revenue to skyrocket 144% from last year’s easy to compare period. This top-line positivity is projected to help the company swing from an adjusted loss of -$0.48 a share in the year-ago period to +$0.09. The clothing firm’s FY21 sales are projected to climb by over 24% to $5.5 billion, with another 10% growth expected in FY22 to see it reach $6.1 billion—above its pre-pandemic levels of $5.8 billion.

At the bottom end of the income statement, its adjusted earnings are projected to soar by 430% this year to reach $1.11 a share, with FY22 set to pop 20% higher. On top of that, Levi’s consensus earnings outlook has improved to help it land a Zacks Rank #1 (Strong Buy) right now, alongside “B” grades for Growth and Momentum in our Style Scores system.

Away-from-home venues such as restaurants, movie theaters, and stadiums make up a large chunk of Coca-Cola’s business. This caused its sales to tumble roughly 30% in the second quarter of last year, and helps make the global beverage maker a solid proxy for the economic reopening. KO sales trended in the right direction in the second half of 2020, with Q4 revenue down just 5%.

Coca-Cola then on April 19 topped our Q1 earnings and revenue estimates. Most importantly, the company said volume in March returned to pre-pandemic levels. KO did provide some caution about how quickly the global economy is due to bounce back, given the uneven vaccine rollout. But Wall Street shrugged off the concerns in favor of U.S. positivity and overall optimism.

KO’s coronavirus struggles did see it ramp up its restructuring efforts. Coca-Cola is reducing its workforce, while also cutting smaller, underperforming brands. And the company was already revamping its portfolio to adapt to changing consumer habits.

The company’s push includes its purchase of potential Starbucks (SBUX - Free Report) rival Costa Coffee, Coke-branded energy drinks, investments in Gatorade challenger BodyArmor—which it could take control of—and more. Coca-Cola even launched an alcoholic version of Topo Chico sparkling water to get in on the booming market hard seltzer market and compete against Boston Beer SAM and others.

Coca-Cola stock is up about 22% in the last year, to lag just behind its industry, but top PepsiCo’s (PEP - Free Report) 14%. At $54 a share, KO trades just below its 52-week highs, with it up 13% in the past three months to match the benchmark index’s climb. And the stock trades right at its own year-long median at 24.3X forward 12-month earnings.

KO currently lands a Zacks Rank #3 (Hold) and it’s certainly no longer a growth stock or anything close to glamorous. But its 3.1% dividend yield top PEP’s 2.8% and crushes the 30-year U.S. Treasury’s 2.3%. Coca-Cola also remains one of the world’s most valuable brands according to Forbes, ahead of Disney (DIS - Free Report) , McDonald’s (MCD - Free Report) , and Nike (NKE - Free Report) , and behind only the tech titans.

Furthermore, eight of the 15 brokerage recommendations Zacks has for KO are “Strong Buys” or “Buys” with none lower than a “Hold.” And it’s worth noting that the stock still has 6% more room to run before it reaches its pre-pandemic records.

2 Top Retail Stocks to Buy in May After Tech Pullback