Yeti (YETI - Free Report) shares have surged 220% in the last year to crush its industry and other higher-end, new-wave retail brands. The Austin, Texas-based firm’s outlook appears strong amid a resurgence in consumer spending and it continues to expand its portfolio beyond coolers.

The question now is should investors think about buying Yeti with its first quarter fiscal 2021 financial results due on Thursday, May 13.

Yeti was founded roughly 15 years ago as a niche, high-end cooler company that catered to commercial fishermen and the like. Its heavy-duty coolers that can cost up to $1,300 are still a mainstay on boats and docks, but its growing array of sizes, colors, styles, and strong branding efforts have helped it turn into a billion-dollar business.

Along with coolers, Yeti sells gear-boxes, outdoor chairs, tumblers, mugs, dog bowls, and much more. Yeti’s 2020 sales jumped roughly 19.5% to $1.1 billion, with its direct-to-consumer revenue up 50% to account for nearly half of its total sales. The company’s DTC growth outside of its wholesale business to stores such as Dick’s Sporting Goods (DKS - Free Report) and other outdoor-focused retailers has helped improve its margins.

Along with e-commerce, Yeti has slowly built out its brick-and-mortar business beyond its flagship store in Austin. The company currently has locations in Denver, Charleston, Chicago, and a few other strategic locations. Investors should also know that its drinkware business accounted for nearly 60% of sales last year, driven by its array of sizes and purposes, as well as colors and customization options.

Yeti is now a staple everywhere from car cupholders and office desks to cookouts, campsites, and beyond. And the company is focused on rolling out more luggage, backpacks, and duffels, with its newer offerings gaining traction against Away and others. 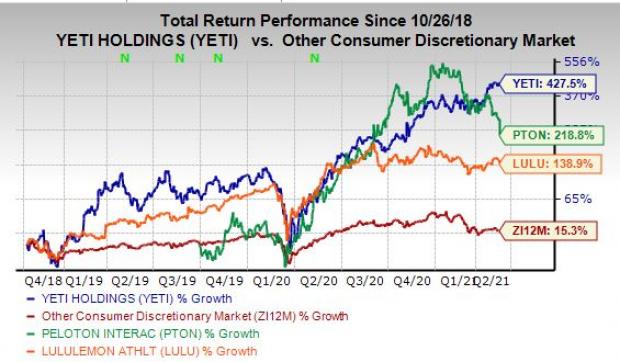 Yeti has benefitted from pandemic-based outdoor spending and consumers appear prepared to keep the buying spree up heading into the summer of 2021 and beyond. For instance, the Commerce Department last week said U.S. GDP jumped by a seasonally adjusted annual rate of 6.4% in the first quarter, to put the economy within 1% of its pre-pandemic levels. And the latest round of stimulus checks helped propel a 4.2% month-over-month jump in spending in March, for the biggest climb since last summer.

Meanwhile, its adjusted earnings are projected to climb by around 16% both this year and next to come in at $2.53 a share in 2022. And the company has topped our bottom-line estimates by an average of 73% in the trailing four periods.

Yeti is part of the Leisure and Recreation Products industry that is in the top 17% of our over 250 Zacks industries and it sports an “A” grade for Growth and a “B” for Momentum in our Style Scores system. The nearby chart also shows that Yeti shares have soared 425% since their public debut in 2018.

This run includes a 26% jump in 2021 vs. its industry 8% decline. Yeti closed regular trading hours Wednesday at $86.70 a share, which puts it just a few dollars below its late-April records. The cooler company does trade at a premium compared to its industry in terms of both forward earnings and sales, but it marks a discount to Lululemon—which is a solid comp based on their growth outlooks and outsized runs.

Unfortunately, some of Yeti’s consensus earnings estimates have slipped slightly to help it land a Zacks Rank #4 (Sell) at the moment. But this rating could change in the run up to its release or after, based on new analyst estimates. Therefore, investors with long-term outlooks should keep their eyes on Yeti heading into earnings.