Iovance Biotherapeutics, Inc. (IOVA - Free Report) incurred loss of 51 cents per share in first-quarter 2021, wider than the Zacks Consensus Estimate of a loss of 48 cents. However, the loss narrowed from 55 cents per share reported in the year-ago quarter.

In the absence of any marketed products and revenue generating collaborations, the company did not record any revenues during the quarter.

Shares of Iovance have declined 38.3% so far this year compared with the industry’s decrease of 6.7%. 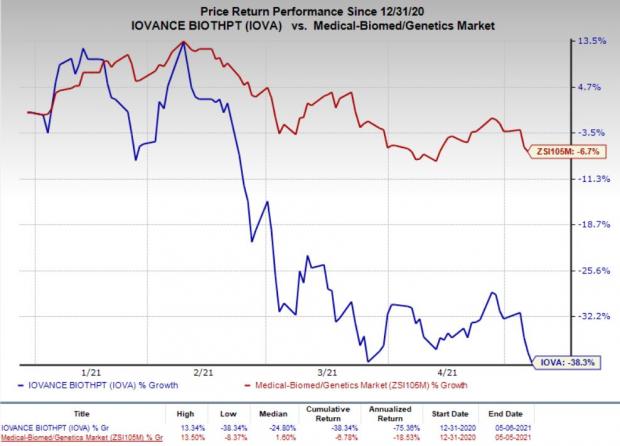 Research & development (R&D) expenses were $55.9 million, 1.9% lower than the year-ago quarter, primarily due to lower manufacturing and clinical costs following the completion of enrollment in the pivotal cohorts for melanoma and cervical cancer studies.

General and administrative (G&A) expenses increased 41% to $19.6 million due to an increase in related personnel costs.

Iovance is developing its lead pipeline candidate, lifileucel, as a monotherapy for treating metastatic melanoma and metastatic cervical cancer in separate pivotal studies.

Per a corporate update from the company in December 2020, median duration of response has not been reached in cohort 2 of the C-144-01 study after median study follow up of 28.1 months evaluating lifileucel in metastatic melanoma patients. Treatment with the candidate had achieved a 36.4% overall response rate. The company submitted additional potency assay data to the FDA to support a biologics license application (“BLA”) expected to be filed later this year. The company is also evaluating new assays for lifileucel as backup options in support of the BLA. The company continues to prepare its commercial team to support a potential launch.

Iovance is evaluating lifileucel monotherapy in patients treated with chemotherapy or anti-PD-1/PDL-1 therapies in separate cohorts of C-145-04 study. Another cohort of the study is evaluating the candidate in combination with Merck’s (MRK - Free Report) Keytruda (pembrolizumab) in cervical cancer patients who are naive to anti-PD-1 therapy.

A multi-cohort phase II study — IOV-COM-202 — is evaluating lifileucel in multiple settings and indications in combination with Merck’s Keytruda or Bristol-Myers’ (BMY - Free Report) Opdivo/Yervoy. The company plans to start a potential registration-directed study — IOV-LUN-202 — going forward to evaluate lifileucel in patients with recurrent or metastatic non-small cell lung cancer, without driver mutations, in patients who were previously treated with approved systemic therapy.