Barring one-time items, adjusted loss was 54 cents per share, wider than the Zacks Consensus Estimate of a loss of 32 cents.

The company generated net sales of $444 million in the first quarter, up around 5% year over year. The figure missed the Zacks Consensus Estimate of $458.8 million. Sales increased 14% sequentially on higher aluminum prices and regional premiums.

Shipments of primary aluminum were 195,697 tons, down around 4% year over year.

At the end of the quarter, the company had cash and cash equivalents of $26.3 million, down 82% year over year.

Net cash used in operating activities was $49.8 million for the quarter.

Century Aluminum stated that it is seeing continued improvement in industry conditions, which reflects the pace and level of general manufacturing activity. The global primary aluminum market is in balance while global inventories continue to decline, the company noted. Century Aluminum also said that the availability of prompt metal units in its major markets remains constrained due to strong demand and limited global capacity additions.

Shares of Century Aluminum have surged 229.1% in the past year compared with 119.3% rise of the industry. 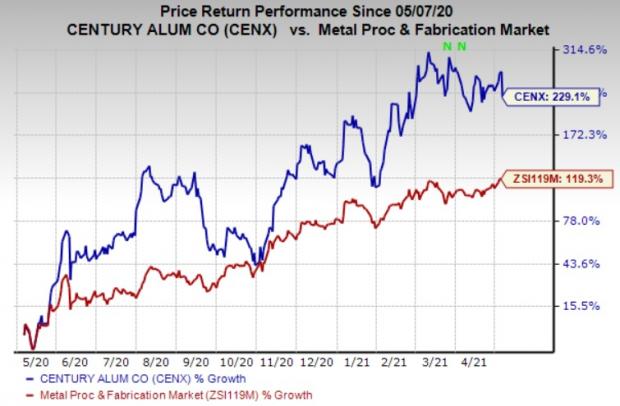 Nucor has a projected earnings growth rate of 228.4% for the current year. The company’s shares have rallied around 134% in a year. It currently sports a Zacks Rank #1 (Strong Buy). You can see the complete list of today’s Zacks #1 Rank stocks here.

Dow has a projected earnings growth rate of 261.5% for the current year. The company’s shares have shot up around 110% in a year. It currently sports a Zacks Rank #1.

Impala Platinum has an expected earnings growth rate of 197.6% for the current fiscal. The company’s shares have surged around 226% in the past year. It currently carries a Zacks Rank #1.