Shares of this organic and natural products company have declined 1.5% in the past three months against the industry’s growth of 9.7%. 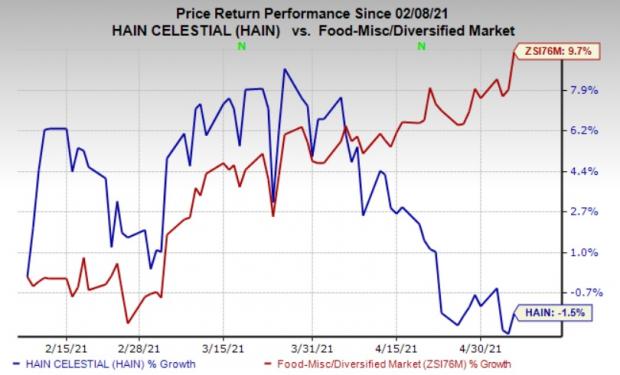 Net sales of $492.6 million declined 11% on a reported basis. Moreover, the top line missed the consensus mark of $504.2 million. The sales decline can be attributed to sluggish sales performance in North America and International segments. The declines were mainly attributed to the pantry loading due to the pandemic-led stay-at-home orders in March 2020. Further, the impact of the Brexit volume, which was pulled into the second quarter of fiscal 2021, and the timing of the Hair Care Program hurt sales by about 700 bps in the fiscal third quarter. Also, divestitures and brand discontinuations hurt sales by 820 bps. However, currency acted as a tailwind and contributed around 320 basis points (bps) to sales.

On adjusting for currency fluctuations, divestitures and discontinued brands, net sales advanced 6% year over year. However, when adjusting for all the aforesaid headwinds, the company’s sales improved slightly from the prior-year quarter.

Adjusted gross margin expanded 317 bps to 27.4%, buoyed by gains from supply-chain productivity initiatives, higher product mix from SKU rationalization efforts and the sale of the fruits business. This was partly offset by higher distribution and warehousing costs, as a percentage of sales. The increase in the costs can be attributed to elevated freight costs in the United States and higher-than-expected inventory levels, partly mitigated by better truck utilization, driven by its consolidation and efficiency initiatives.

Net sales in the North America segment dropped 10% year over year to $287.5 million. On adjusting for currency movements, divestitures and discontinued brands, net sales declined 8%. The decline can be attributed to the Personal Care Club program, which was not repeated in the fiscal third quarter, as well as tough comparison with the prior-year quarter due to pantry-stocking activities that occurred after the onset of the pandemic. Segment adjusted operating income rose 15% to $43.9 million. The segment’s adjusted EBITDA amounted to $48.5 million, rising nearly 13%. Moreover, adjusted EBITDA margin expanded 348 bps to 16.9%. The Get Bigger brand is also performing well.

International net sales declined 12% year over year to $205.1 million. Foreign exchange contributed nearly 660 bps to sales, while divestitures marred sales by 160 bps. On adjusting for foreign currency fluctuations, divestitures and discontinued brands, net sales dipped 3% year over year. The decline in net sales was driven by lower customer inventories in the U.K., which were elevated in the fiscal second quarter in anticipation of potential Brexit-related supply disruptions. Additionally, sales were impacted by last year’s pantry stocking due to the pandemic-led stay-at-home orders.

In the quarter under review, the company repurchased 0.2 million shares for $8.6 million, excluding commissions under its share buyback program. It had shares worth $109.5 million remaining under its buyback authorization as of Mar 31, 2021.

For the fiscal fourth quarter, it expects solid gross margin and EBITDA margin expansion, with adjusted EBITDA rising close to 10%. Gross margin for the quarter is expected to increase 100 bps.

For the fiscal fourth quarter, the company anticipates a 5-8% year-over-year decline in net sales, when adjusted for foreign exchange, divestitures and discontinued brands. When compared with the fourth quarter of fiscal 2019, net sales are expected to increase in mid-single digits, after adjusting for foreign currency, divestitures and discontinued brands.

For fiscal 2021, capital expenditure is projected to be close to 5% of net sales, suggesting growth from the year-ago reported figure. Adjusted effective tax rate is anticipated between 24% and 25%.

Darling Ingredients Inc. (DAR - Free Report) , with a Zacks Rank #2 (Buy), has a trailing four-quarter earnings surprise of 20.7%, on average.

HollyFrontier (HFC) to Purchase Shell's US Refinery for $350M