The U.S. economy fell well short of jobs expectations for April. Employers added only 266,00 new jobs, when projections called for roughly 1 million. The dramatic slowdown in hiring could set back an economy that looked to be kicking back into high gear, with Q1 GDP up 6.4%.

Economists and analysts have provided multiple possibilities for the big miss and why businesses found it harder to hire new employees despite seemingly strong conditions. Some of the reasons for the disappointing numbers likely stem from a combination of expanded unemployment benefits, child-care setbacks amid school closures, and lingering coronavirus fears.

The new data, which accompanied a downward revision for March, will hopefully prove to be a blip on the radar to recovery with more than 40% of U.S. adults fully vaccinated and the daily number of new Covid-19 cases on the decline. The positive trend on the coronavirus front has seen many states lift more and more restrictions.

The jobs news sent the Nasdaq up 0.88% on Friday, while the S&P 500 and the Dow both hit new records, as Wall Street decided higher interest rates are now even less likely. Clearly, hiring could rebound in May, but let’s dive into three technology stocks that aren’t banking on a swift economic recovery following the disappointing jobs data…

Adobe’s subscription-based software from Photoshop to InDesign continues to propel top and bottom-line growth and its business is hardly tied to broader business cycles. ADBE crushed our first quarter FY21 estimates in late March and raised its guidance.

Looking forward, Zacks estimates call for Adobe’s full-year revenue to pop over 20% to $15.5 billion and then jump another 15% in FY22. These projections extend its streak of roughly 15% or stronger sales growth to eight-straight years, which is great for a firm that went public in the mid-1980s.

At the bottom end of the income statement, ADBE’s adjusted earnings are expected to climb by 18% and 15%, respectively. The company also boasts a strong history of quarterly earnings beats and its improved bottom-line outlook helps it earn a Zacks Rank #2 (Buy) at the moment, alongside its “B” grade for Growth in our Style Scores system.

Adobe’s slew of creative and design software are the standard-bearers in the industry and are used by everyone from big businesses and universities to individuals. ADBE has also introduced newer creative software offerings for the digital media age where high-quality content is paramount. Meanwhile, the firm that created the PDF has expanded its business-focused roster into marketing and beyond, and in December it completed its purchase of leading work management platform for marketers called Workfront. 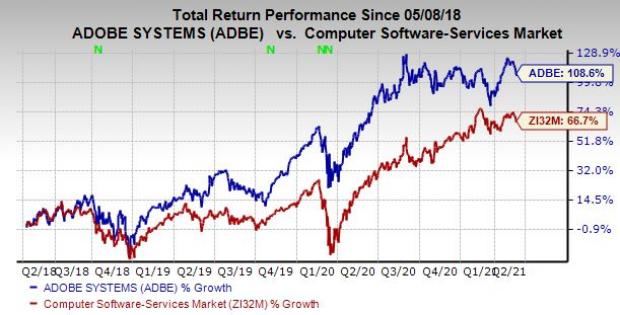 In terms of valuation, Adobe is trading 10% below its own year-long median when it comes to forward earnings. ADBE also comes in below neutral RSI levels (50) at 43, which could give it plenty more room to run. And 13 of the 15 broker recommendations Zacks has for Adobe are “Strong Buys” with another “Buy” and only one “Hold.”

Therefore, people with long-term investment horizons might want to consider scooping up Adobe for its ability to consistently grow within the broader SaaS market, with hard-to-replicate creative software offerings.

Veeva Systems offers cloud-based solutions for the pharmaceutical and life sciences industries and it has expanded its revenue by 25% or higher every year since it went public in 2013. VEEV’s SaaS model provides industry-specific tools for customer relationship management, content management, and many other enterprise applications.

VEEV helps its nearly 1,000 clients’ critical business functions work more seamlessly through cloud-based architectures and mobile applications for R&D, training services, regulatory processes, and nearly anything else a firm in these fields might need.

VEEV’s clients include the likes of Merck and Eli Lilly, as well as smaller biotech firms, with a broader goal to “helps companies of all sizes bring products to market faster and more efficiently, and maintain compliance.” The California-based firm’s string of revenue growth includes a 33% jump last year (FY21- ended Jan. 31). Veeva has also topped our bottom-line estimates in the trailing four periods by an average of 14%.

Zacks estimates call for Veeva’s fiscal 2022 revenue to climb over 21%, from $1.47 billion to $1.76 billion, with FY23 projected to come in 19% higher to reach $2.1 billion. Along with this projected top-line expansion, the firm’s adjusted earnings are projected to climb by 10% and 18%, respectively over this stretch. VEEV’s positive EPS revisions help it land a Zacks Rank #2 (Buy), with it set to release Q1 FY222 financial results on May 27.

Investors should note that VEEV stock has fallen below both its 50-day and 200-day moving averages recently, which is a position it has rarely stayed for long. The stock fought its way back from oversold RSI (30) levels in early March to over 60. But its recent downturn has it trading 20% below its mid-February records and below neutral RSI levels at 40.

Veeva’s pullback makes more sense when we consider that the stock has skyrocketed 855% in the last five years. Furthermore, 13 of the 18 brokerage recommendations Zacks has for Veeva are either “Strong Buys” or “Buys,” alongside four “Holds.” And the company boasts a solid balance sheet.

Microsoft is coming off another blowout quarterly report (Q3 FY21) on April 27 that saw it post 19% sales growth and 40% adjusted EPS expansion. Analysts once again raised their outlooks for MSFT, with its 2021 revenue projected to climb 16% to $166 billion, while FY22 sales are set to pop another 11.3% to extend its streak of between 10% to 15% sales growth to five years. Meanwhile, its adjusted earnings are projected to climb 35% and 6%, respectively.

The company’s consistent growth showcases its expansion into cloud computing and commitment to strategic acquisitions. Microsoft’s ability to expand its cloud business alongside Amazon and others during the last several years has transformed the tech icon’s outlook. Cloud now plays a role across the entire company from Office and Xbox to Azure, remote work products, and beyond.

Prior to its release, MSFT announced in mid-April its plans to buy Nuance Communications Inc. (NUAN - Free Report) for $16 billion, making it the second-largest deal under CEO Satya Nadella. Nuance is at the forefront of speech recognition and AI, with its tech set to roll into MSFT’s booming cloud business for healthcare clients and beyond.

Microsoft stock soared in the run-up to its release, but the stock sold off after its report as Wall Street took profits and decided not to send big tech up higher given the possibility of near-term deceleration against hard-to-compare periods. The stock did pop Friday to close regular hours around 4% below its recent records.

Despite its 14% climb in 2021 and 175% surge in the past three years to blow away its industry’s 67%, Microsoft sits right near neutral RSI levels at 51. MSFT also trades at 30.5X forward 12-month earnings, which marks a discount to its industry’s 33.6X and its own year-long median.

Microsoft’s earnings revisions help it land a Zacks Rank #2 (Buy) at the moment and 20 of the 21 brokerage recommendations Zacks has are “Strong Buys,” with the other sitting at a “Buy.” Plus, MSFT closed the quarter with $125 billion in cash and equivalents.

The cash stockpile is how it has funded its acquisitions, as well as buybacks. MSFT returned $10 billion to shareholders via repurchases and dividends last quarter, with its 0.89% yield topping Apple’s (AAPL - Free Report) 0.68%.