The Zacks Rank stock-picking system is a proven method for both beginning and experienced investors to identify the strongest stocks to buy. The model, which recognizes the importance of earnings estimates and estimate revisions, highlights stocks of all shapes and size that are poised to outperform the market.

When a company earns the coveted Zacks Rank #1 (Strong Buy), it is displaying the right characteristics to beat the market over the next one to three months. But of course, reaching this ideal rank is not an easy feat. Of the thousands of companies tracked by Zacks, only about 5% earn this designation.

Below, you will read about one specific company that helped prove the strength of the Zacks Rank. If investors had followed our model when it identified this global video game powerhouse, they would have achieved massive profits.

Nintendo is one of the world’s most historic interactive entertainment brands. The Japanese company has created a number of iconic video game franchises, including Mario, The Legend of Zelda, and Pokemon. Nintendo also manufactures and markets hardware and software for its popular home video game systems, and it is able to license its iconic characters and titles for a variety of multimedia purposes.

NTDOY has been a staple of the Zacks Rank #1 (Strong Buy) list for the past year, first earning the rank on April 7, 2017. The video game publisher witnesses strong analyst sentiment on the back of great sales figures from its latest console, the Nintendo Switch.

The Switch is a pretty cool new concept from Nintendo that blends the in-home console and on-the-go gaming experiences. The device is “powered” by its Joy-Con controllers, which have motion sensing technology and can be used as standalone devices, in conjunction with a grip that creates a classic controller feel, or attached to a tablet-like device for mobile gaming.

Shortly before earning its first Zacks Rank #1 (Strong Buy) of 2017, Nintendo reported that the Switch was the best-selling Nintendo console in the U.S. in its first month of availability. And early reports suggested that the device would easily crush Nintendo’s first-month sales goal of two million units.

NTDOY would carry its #1 (Strong Buy) for three weeks, never dipping below a #3 (Hold) until once again earning the #1 designation on June 30. By this time, shares of the Switch maker were already up 44% since early April.

Nintendo earned its second #1 (Strong Buy) shortly after announcing a slew of new games at the video game industry’s top conference, E3. The company also debuted its new Super Nintendo Entertainment System (SNES) Classic Edition console, a follow up to the NES Classic that was routinely sold out around the world.

NTODY maintained this top rank for six weeks and again did not dip below a #3 (Hold) unit earning its third #1 (Strong Buy) on October 6. Between its second and third #1 designations, Nintendo shares gained an additional 16%.

Since then, Nintendo has fluctuated between a Zacks Rank #2 (Buy) and a #1 (Strong Buy) ranking, which it currently holds at the time of this writing.

The below chart demonstrates the price performance for NTDOY and 12-month forward looking EPS estimate (in red), starting from the time the stock first earned a Zacks Rank #1 (Strong Buy). 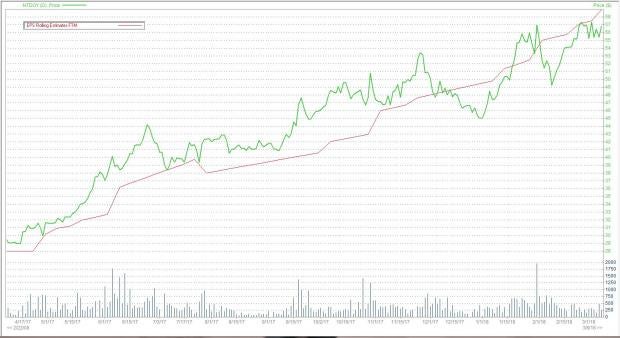 As we can see, NTDOY was a huge winner for those that followed the Zacks Rank. The stock is currently up more than 97% since earning a Zacks Rank #1 (Strong Buy) last year. Investors should know that our model is the simplest way to identify elite stocks poised to beat the market on a consistent basis.