Better-than-expected results impressed the market, with the stock’s price increasing 2% since the earnings release on May 4.

In the past year, ICF’s stock has increased 51% compared with 8.9% growth of the industry it belongs to. 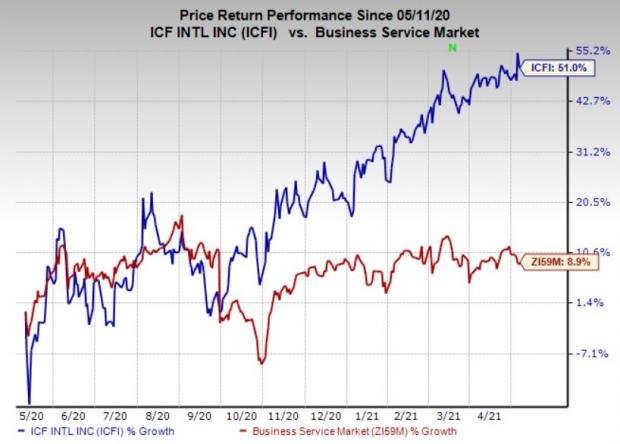 Non-GAAP earnings of $1.13 per share surpassed the Zacks Consensus Estimate by 34.5% and increased 36.1% on a year-over-year basis. Moreover, revenues of $378.5 million surpassed the consensus mark by 4.7% and increased 5.6% year over year owing to increase in service revenues.

Total backlog and funded backlog amounted to $3 billion and $1.6 billion at the end of the quarter, respectively. The total value of contracts awarded in the quarter came in at $596.1 million, up 67% year over year.

The company generated around $5 million of cash from operating activities and capex was $3.6 million. ICF paid out dividends of $2.6 million in the quarter.

Revenues are projected in the range of $1.525-$1.575 billion. The midpoint ($1.55 billion) of the guidance is same as the current Zacks Consensus Estimate.

EBITDA is expected to be in the range of $145 million and $155 million. Operating cash flow is anticipated to be approximately $100 million.