In the past week, Azul (AZUL - Free Report) reported wider-than-expected loss per share in the first quarter of 2021 as a second wave of coronavirus hit Brazil. Also, due to this resurgence of the pandemic, another Brazilian carrier Gol Linhas’ (GOL - Free Report) traffic in April declined substantially from its March figures.

Additionally, Gol Linhas reported lackluster first-quarter 2021 results due to coronavirus-induced suppressed air-travel demand, per the previous week’s write up. Meanwhile, Delta Air Lines (DAL - Free Report) came up with an expansion update, as air-travel demand picks up in the United States with more and more Americans getting vaccinated.

1. Azul, presently carrying a Zacks Rank #4 (Sell), incurred a loss (excluded $2.44 from non-recurring items) of $1.78 per share in the first quarter of 2021, wider than the Zacks Consensus Estimate of a loss of $1.64. In the year-ago quarter, the company reported adjusted loss of $1.63 per share. Moreover, total revenues of $334 million missed the Zacks Consensus Estimate of $341.3 million. The top line fell 47.2% on a year-over-year basis. Passenger revenues, contributing 87.5% to the top line, plunged 39.8% year over year.

2. With Brazil reeling under a second wave of the deadly coronavirus pandemic, it was only natural that Gol Linhas’ April traffic numbers compared unfavorably with the March reading. Notably, traffic, measured in revenue passenger kilometers, slumped 36% in April month over-month. Capacity (measured in available seat kilometers) declined 44.5% in April from March levels. Load factor (% of seats filled with passengers) was 82.8% in April.

3. In a bid to revive international travel, Delta will start operating non-stop flights to Croatia Jul 2 onward. The airline will carry only fully vaccinated people on its flights to the country, which is one of the most favorite tourist attractions in Europe. To this end, the carrier will operate non-stop flights four times a week on the New York-JFK-Dubrovnik route. Notably, this will be the first time that Delta will operate direct flights to Croatia.

4. Copa Holdings (CPA - Free Report) incurred a loss (excluding 37 cents from non-recurring items) of $2.23 per share in the first quarter of 2021, narrower than the Zacks Consensus Estimate of a loss of $2.25. In the year-ago period, the company reported earnings of $1.75. Results were hurt by coronavirus-induced limited flight operations. The company’s flight schedule was only 39% of the first-quarter 2019 (pre-pandemic) level in the quarter.

Quarterly revenues of $185.7 million missed the Zacks Consensus Estimate of $188.9 million and also plunged 68.8% year over year, with passenger revenues (contributed 93.2% to the top line) declining 69.9%.

5. Per a Reuters report, United Airlines (UAL - Free Report) will temporarily suspend services between Chicago, IL and New Delhi, India as well as delay the launch of its San Francisco-Bangalore flights, thanks to reduced demand due to the spike in coronavirus cases in India. While United Airlines will continue to operate its daily flights to Delhi from Newark; NJ and San Francisco; CA as well as to Mumbai from Newark, the carrier will temporarily halt its Chicago-New Delhi operation on May 31. 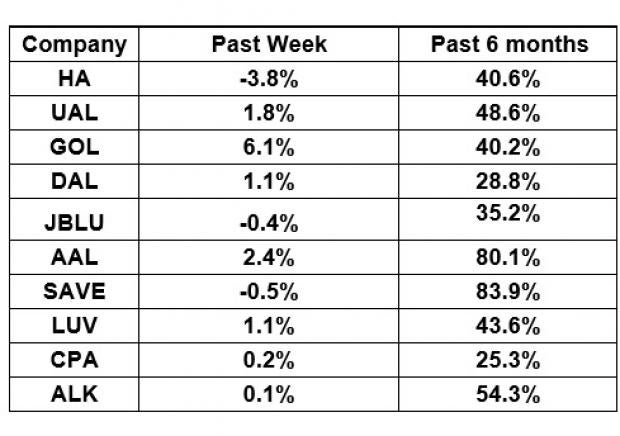