The Nasdaq tumbled 2.6% Monday and was down big early Tuesday, before it recouped most of its decline, as Wall Street sold technology stocks amid renewed inflation worries.

The Nasdaq has slipped below its 50-day moving average and is down 5% from its recent highs. Plus, the Dow posted its biggest one-day decline since late February on Tuesday, while the S&P 500 slipped 0.87%.

The cost of goods continues to climb across a range of areas, with consumer prices up 2.6% in the year ended in March, for the biggest 12-month increase since August 2018. The Fed and some on Wall Street point out that these elevated prices are compared against the early shock of the coronavirus and are made worse by supply chain setbacks amid the economic reopening.

The pent-up demand, mixed with government checks has amplified the situation. Yet the Fed remains steadfast that inflation will be “transitory” and retreat later this year.

Last Friday’s far worse-than-projected jobs report might boost the Fed’s case to continue its easy-money policies. The Fed also committed last summer to a new “average inflation targeting,” which means the central bank will allow inflation to run above its 2% target for some period of time.

All that said, the Dow and the S&P sit just below their records and the Nasdaq is up around 50% in the past year. Therefore, Wall Street is going to continue to take opportunities to pull profits when it can.

Think how quickly the Nasdaq fell into a correction from its mid-February records, only to climb to new highs in late April. Given this backdrop, investors likely want to remain exposed to the market.

Let’s dive into three strong dividend-paying stocks that could be solid near-term plays, as well as long-term holds… 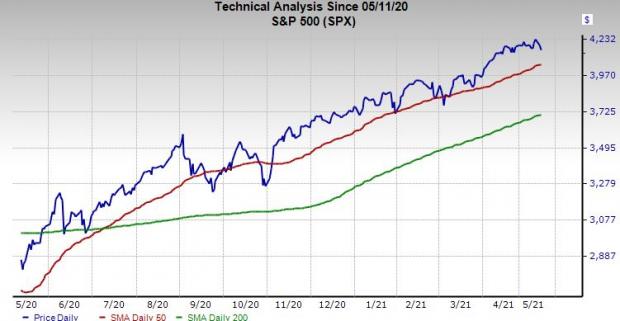 The pharmaceutical power topped our Q1 estimates on April 30 and raised its 2021 guidance, on the back of strong performances across its core therapeutic areas. The growth showcased its expanded portfolio and ability to adapt as its patent protections run out for one of the world’s top-selling drugs, Humira—biosimilars are already available outside of the U.S., with domestic competition set to start in 2023. AbbVie prepared for the future through its $63 billion purchase of Allergan last May.

The deal brought Botox and other popular drugs into a diversified medicine cabinet that includes immunology, oncology, neuroscience, a strong R&D pipeline, and more. “Our new products are delivering impressive performance and we are on the cusp of potential commercial approvals for more than a dozen new products or indications over the next two years–including five expected approvals in 2021,” CEO Richard Gonzalez said in prepared remarks.

ABBV’s FY20 revenue surged 38%, driven by its Allergan deal, with its Q1 revenue up 51% and adjusted earnings 21% higher. Zacks estimates call for its FY21 revenue to jump another 22%, with FY22 projected to climb 7% higher to $60 billion. On the bottom-line, its adjusted earnings are projected to pop 19% and 11%, respectively over this stretch. Zacks longer-term consensus earnings moved higher following its first quarter release, but a slight downward revision to Q2 helps AbbVie grab a Zacks Rank #3 (Hold).

In keeping with the topic, AbbVie has increased its dividend by 225% since its inception in 2013. Its current $1.30 a share quarterly dividend yields 4.47% to crush its industry’s 2.46% average and the recently-rising 30-year U.S. Treasury’s 2.28%. ABBV’s yield is even better since the stock has climbed 37% in the past year to blow away its Large Cap Pharma space’s 13% climb. This outperformance stretches over the last five years, up 130% vs. 71%.

The stock has jumped 11% in the past three months to top the S&P 500 and its industry. AbbVie popped to 52-week records Monday, before it slipped Tuesday after it stopped right below overbought RSI territory of 70—currently sits at 62. On the valuation front, ABBV trades at a deep discount to its industry at 8.9X forward 12-month earnings vs. 14.3X, and its own year-long highs.

AbbVie’s valuation and dividend grabbed Warren Buffett and Berkshire Hathaway’s attention last year. And 11 of the 15 brokerage recommendations Zacks has for the stock are “Strong Buys,” with nothing below a “Hold.”

PEP landed a partnership with Beyond Meat (BYND - Free Report) in January that creates “a joint venture to develop, produce and market innovative snack and beverage products made from plant-based protein.” The deal helps PepsiCo better position itself to enter a fast-growing market. And the space could be a real game-changer if consumers buy into Beyond Meat’s broader sustainability pitch.

PepsiCo’s array of products helped its 2020 revenue jump 5% to come in at $70.4 billion. This topped FY19’s 4% sales expansion and marked its strongest top line expansion since 2011, as consumers gravitated to its offerings during the pandemic that saw retailers like Target (TGT - Free Report) and Walmart (WMT - Free Report) thrive. 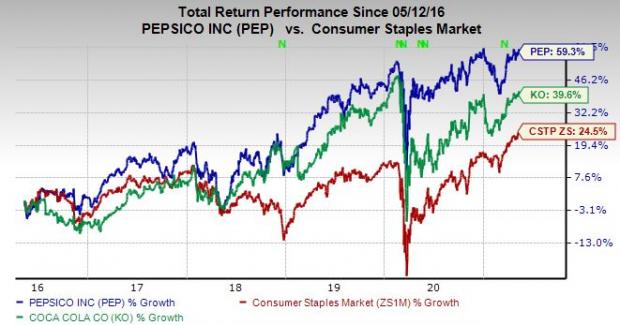 PEP topped our Q1 estimates on April 15, with sales up 7% and adjusted earnings up 13%. Zacks estimates call for PEP’s fiscal 2021 revenue to climb 7% higher to $75.2 billion, with FY22 set to jump another 4.6%. Meanwhile, the company’s adjusted EPS figures are projected to climb by 10% this year and another 8% next year.

PEP shares have popped 10% in the last three months and they sit about 2% below their records at the moment. Despite the positivity, the stock it below overbought RSI levels (70) at 57. On top of that, PepsiCo has consistently traded at a discount to KO in terms of forward earnings—23.6X vs. 24.6X. PepsiCo currently lands a Zacks Rank #3 (Hold) and 8 of the 15 brokerage recommendations Zacks has are “Strong Buys,” with only one “Sell.”

NextEra Energy Partners is a growth-focused limited partnership formed by energy giant NextEra Energy (NEE - Free Report) , which itself offers a 2.06% dividend yield. NEP acquires, manages, and owns contracted clean energy projects with stable, long-term cash flows. The Florida-based firm owns interests in wind and solar projects in the U.S. and also has a foothold in the natural gas market.

All three areas will remain vital as the U.S. moves away from coal. For instance, the U.S. Energy Information Administration reported that renewables accounted for roughly 20% of electricity generation in the U.S. last year, while natural gas leads the way at 40%. The EIA projects renewables will account for roughly 40% by 2050, with most of that expansion coming from wind and solar, while natural gas is expected to hold steady. 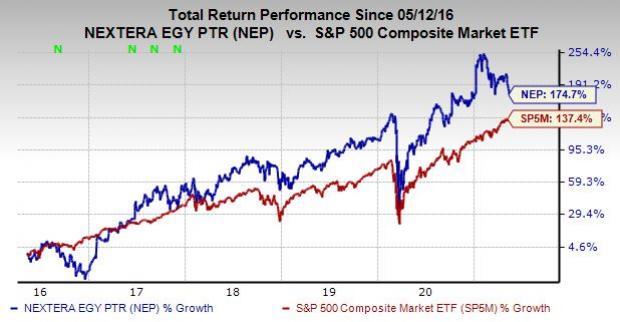 NEP shares were riding high until they began to sell off in February, alongside other growth names, after they climbed from roughly $45 a share in March 2020 to over $80 by early 2021. NEP dipped another 2.3% during regular trading Tuesday to $65.68 a share, which put it about 22% below its records.

The downturn has pushed it below oversold RSI levels (30) at 27.5. This could give it room to climb, especially for investors with long-term outlooks. That said, the stock has fallen below its 200-day moving average, which means some might want to wait for signs of a comeback before considering the stock that’s climbed 175% in the past five years to double the Alternative Energy industry and top the S&P 500’s 137%.

The pullback has helped recalibrate NEP’s valuation, with it trading 50% below its own year-long median at 20.5X forward 12-month earnings, which represents a discount to the benchmark index’s 22.3X. The recent downturn has also helped lift its already-strong dividend yield to 3.79%.

The company also constantly raises its quarterly payout, with its current dividend up 240% since its early days as a public company in 2014. NEP’s 3.79% yield tops the 10-year U.S. Treasury’s 1.62%. And six of the nine brokerage ratings Zacks has for NextEra Energy Partners are “Strong Buys” or “Buys,” with only one “Sell.”