Stocks tumbled across the board Wednesday on the back of inflation worries that could force the Fed to reassess its easy money policies and raise its core interest rate. The consumer-price index climbed 4.2% in April from the year earlier, marking the largest 12-month climb since the summer of 2008. Core prices, which exclude food and energy, climbed 3% during the same stretch.

The climb in prices was higher than economists projected and up big from the 2.6% jumps in March. The news pushed the S&P 500 down roughly 2.1%, while the Dow slipped 2%, and the Nasdaq dropped 2.7%. Wednesday represented the biggest three-day declines since late October for both the benchmark and the blue-chip index. The yield on the 10-year U.S. Treasury also popped.

The Fed continues to point out that these elevated prices are compared against the early shock of the coronavirus and are made worse by supply chain setbacks amid the economic reopening. The pent-up demand, mixed with government checks has amplified the situation. Yet the Fed remains steadfast that inflation will be “transitory” and retreat later this year.

Investors have clearly grown a bit more nervous about inflation amid pent-up demand and an economic resurgence, boosted by the U.S. vaccine push. That said, the Dow and the S&P 500 hit new records last week. Meanwhile, the Nasdaq is down 8% from its late-April records, which followed a big run after it fell into a correction that started in mid-February, also sparked, in part, by inflation worries.

Clearly, prices are going up and there could be more near-term selling despite broader economic positives from GDP growth to rising earnings. But Wall Street is also always going to take opportunities to pull profits when it can. Therefore, investors with longer-term horizons might consider adding strong, stable stocks poised to grow for years to come… 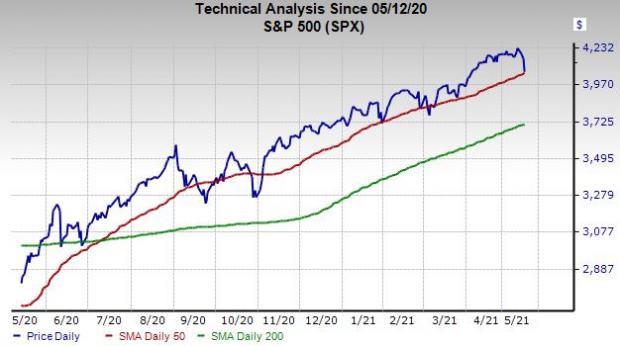 Union Pacific is a rail freight titan that has climbed 450% in the last decade to easily outpace the broader Zacks Transportation sector’s 136% and the S&P 500’s 337%. This outperformance has continued more recently as well, given the company’s standing within an industry that isn’t going away no matter what the future holds.

UNP links together 23 states in the western two-thirds of the U.S., helping serve many of the fastest-growing cities in the country. UNP also connects with Canada’s rail system and is the “only railroad serving all six major Mexico gateways.” Before the pandemic, it had already transitioned to run far fewer trains with far more cars.

The company has transformed along with most of the industry through a process known as “precision scheduled railroading.” And UNP operates some of the longest runs in the U.S. This gave management confidence to think it can one day produce the lowest ratio of expenses to revenue in the entire industry. For instance, UNP has already increased its train length across its system by 30% since it first began the precision-scheduled initiative (Q4 FY18).

UNP’s revenue did fall 10% in 2020, driven by low demand within the energy space and the broader economic downturn. Despite first quarter setbacks, the company reaffirmed its 2021 guidance on April 22, given its “continued commitment to value based pricing that exceeds inflation” and more.

Zacks estimates call for UNP’s 2021 sales to pop 8.5% to reach $21.2 billion and then climb 6% higher in FY22 to come in a $22.4 billion, which would push it above pre-pandemic levels. Meanwhile, its adjusted earnings are expected to climb by 17% and 13%, respectively. These projections stack up well against other recent growth years.

Analysts have raised their bottom-line outlooks since Union Pacific posted its Q1 results last month. UNP currently lands a Zacks Rank #3 (Hold), while 12 out of the 14 brokerage recommendations Zacks has are “Strong Buys.” And its 1.75% dividend yield roughly matches the 10-year U.S. Treasury and tops its industry’s 1.17% average.

Union Pacific has paid a dividend for over 120 years, and its commitment to efficiency and modernization will continue to boost profits and help it return value to shareholders. Plus, railroads might become more critical if the green movement goes into hyperdrive. UNP said that “on average, trains are four times more fuel-efficient than trucks. That means moving freight by rail instead of truck reduces greenhouse gas emissions by 75%.”

UNP has climbed 48% in the last year and 7% in 2021. The stock closed regular hours Wednesday at $222 a share, or about 4% below its recent records. Despite resting near its highs, Union Pacific is now below neutral RSI levels (50) at 48, which could give it room to run in the near-term.

Target’s e-commerce boom helped it thrive during the heart of the pandemic, as consumers looked for as many different and convenient ways to shop as possible. TGT’s same-day offerings feature in-store pickup, Drive Up, and its subscription-style Shipt unit. The Minneapolis-based retailer has also continued to attract customers through on-trend and affordable fashion, home décor, furniture, food, and more.

Meanwhile, TGT continues to partner with designers on everything from fashion to furniture. TGT’s flagship grocery brand has also performed well alongside many of its upscale-aiming, in-house brands. Target has successfully positioned itself as a one-stop shopping option and has been able to grow despite Amazon’s (AMZN - Free Report) constant pressure on the industry at large. And it’s separated itself from rivals such as Walmart (WMT - Free Report) and Costco (COST - Free Report) within some key demographics.

Target’s 2020 sales surged 20%, with comps up over 19%. This huge top-line growth was driven by 7% in-store comps expansion and a 145% digital boom. And its adjusted earnings surged nearly 50% last year and it has consistently topped our bottom-line estimates.

Target’s EPS revisions help it land a Zacks Rank #2 (Buy) right now, alongside an “A” grade for Growth and a “B” for Value in our Style Scores system. Target’s margins are also better than its rivals Walmart and Amazon. And it has been able to thrive and keep costs relatively low despite its e-commerce push because it’s able to fulfill nearly all of its sales via its own stores.

Target stock has blown away WMT and the S&P 500 in the last three years, up 200%, including a 73% run in the past 12 months. TGT has cooled down a bit, but it has still outpaced the benchmark in 2021. At around $203 a share, Target closed regular hours Wednesday 6% below its new highs. The quick pullback has pushed Target underneath neutral RSI levels (50) at 44.

Target trades at a discount compared to its industry and WMT despite its outperformance. And it provides income, with a 1.3% dividend yield that tops its industry’s 0.81% average and roughly matches the S&P 500. And 14 of the 19 brokerage recommendations Zacks has for TGT are “Strong Buys,” with none below a “Hold.”

Target is set to report its Q1 FY21 financial results on May 19 and analysts have turned more positive on the retailer heading into its release.