Petrobras (PBR - Free Report) ordered a floating production, storage and offloading (“FPSO”) vessel from Keppel Shipyard in the Santos Basin offshore Brazil. Notably, this will be the seventh FPSO unit to be built in the Búzios field of the Santos Basin pre-salt area.

Founded in 2010, the Búzios field is known as the largest deep-water oil field globally. It is believed that Buzios will have a daily production of more than 2 million barrels of oil equivalent per day by the end of the decade, making itself the largest oil-producing asset of Petrobras.

Keppel Shipyard, a subsidiary of Keppel Offshore & Marine (or Keppel O&M), will develop the FPSO unit under the terms of an engineering, procurement and construction contract. Notably, the order was made as part of Petrobras' strategy to develop projects for its platforms by applying the insights gained from the already-installed FPSOs in the pre-salt, which includes contracting and construction aspects.

Keppel O&M will manufacture the topside components of the FPSO at its shipyards in Singapore, China and Brazil. It will also conduct the associated integration and commissioning works. Moreover, its partner, Hyundai Heavy Industries, will deliver the oil tanker hull and the living quarters for the FPSO. Keppel O&M will also perform the final phase of placing the FPSO into service after it reaches the Buzios field.

The FPSO, which will be named P-78, will have a distillation capacity of 180 thousand barrels of oil per day and 7.2 million cubic meters of gas per day.  Notably, the platform is a floating unit that produces, stores and transfers oil. The order is valued at $2.3 billion and is expected to be delivered by the end of 2024.

Notably, the project implements the company’s capabilities as a leading integrator of offshore energy and infrastructure assets by utilizing its abilities in engineering and project management for higher value-adding work.

Petrobras is the largest integrated energy firm in Brazil and one of the biggest in Latin America. Its activities include exploration, exploitation and production of oil from reservoir wells, shale and other rocks. Further, it comprises refining, processing, trading and transportation of oil and oil products, natural gas, and other fluid hydrocarbons beside other energy-related operations.

Shares of the company have outperformed the industry in the past month. Its stock has gained 7.4% compared with the industry’s 2.5% growth. 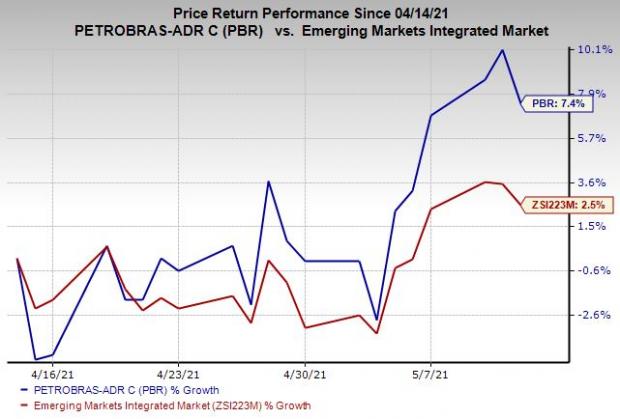 Oceaneering’s 2021 earnings are expected to surge 925% year over year.

Here's Why You Should Retain Intuitive Surgical (ISRG) Now