Bank of America Corp (BAC - Free Report) has agreed to pay a penalty of $75 million in order to settle a lawsuit with the federal court in Charlotte, NC, where the bank is based.

Per a Reuters article, the probes were related to the extraction of overdraft fees that the bank did not earn from customers’ savings and checking accounts.

In reviews, the company’s customers have accused Bank of America of charging $35 fees several times on a single transaction for insufficient funds or overdrafts. At times it also reflects the bank’s repeated attempts to process a payment at a merchant’s request.

Per the terms, the bank will stop imposing multiple fees on "retry" payments for at least five years. This will save an estimated amount of $5.3 million a month and $318 million on an overall basis of customers.

Deutsche Bank (DB - Free Report) has agreed to pay a penalty of more than $130 million. The move will fully settle the probes related to criminal and civil charges against the bank for bribing foreign officials and manipulating the precious-metals futures market through a trading method called spoofing.

Also, JPMorgan (JPM - Free Report) has agreed to pay a fine of $250 million for poor risk management and internal controls over the fiduciary business. This was the second time over the last three months that the company faced penalty.

Though involvement in legal probes and proceeding might keep related costs elevated, the opening of new branches, enhanced digital offerings, strategic buyouts and efforts to manage expenses will aid the bank’s profitability in the quarters.

Shares of Bank of America have appreciated 58.8% in the past six months compared with the industry's 51.9% growth. 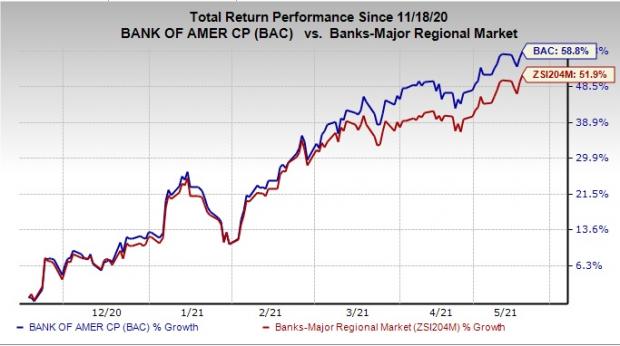