2 Great Cheap Stocks to Buy Now on the Dip

The market dipped to start the week, with stocks down again Tuesday. There was no clear catalyst aside from profit-taking after stocks surged to end last week following a wave of inflation-based selling that saw the Dow and the S&P 500 suffer their toughest three-day stretch since October.

Despite the pullback, the benchmark index remains above its 50-day moving average after buyers stepped in last Thursday once enough Wall Street decided the inflation pullback had been overdone.

April’s CPI jumped 4.2% from a year earlier, for its largest 12-month jump since the summer of 2008 and came above expectations. The jump in consumer prices came amid the U.S. economic resurgence, driven by the vaccine, pent-up demand, easy money policies, and government checks.

The logic follows that higher prices will force the Fed to raise rates. But the central bank continues to say inflation will be “transitory” and stresses that prices are compared against the early shock of the coronavirus. The Fed has also continued to voice its commitment to ultra-low rates and its new “average inflation targeting,” meaning it will allow inflation to run above its 2% target for some extended period.

Amid the fears of inflation and a possible end to the easy-money policy, it’s worth reminding investors that if rates do climb, they will likely remain historically low. This sets up a scenario where money still has to chase returns in a low-yield environment.

Overall, the backdrop of improving earnings, 6.5% GDP growth, and the continually reopening U.S. economy, likely sets up a bullish outlook for the rest of the year and beyond. Here are two highly-ranked Zacks stocks investors might want to buy to capitalize on pent-up consumer demand that are also trading for under $30 a share… 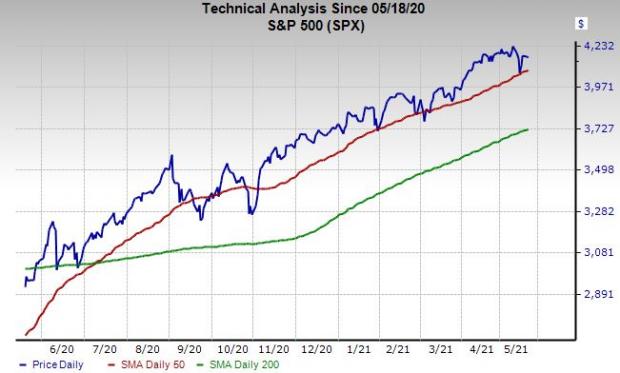 Ethan Allen is an interior design firm, manufacturer, and home furnishings retailer. ETH was hit hard by the early coronavirus lockdowns, with its fiscal 2020 (ended June 30) sales down 21%. But things have changed since then, starting with a return to growth in the second quarter of FY21, with revenue up 2.5%. The company then posted 18% sales growth on April 29 and saw its adjusted earnings soar from $0.02 to $0.58 a share.

Ethan Allen executives also provided strong guidance, with its Q4 consensus EPS estimate now up 140%, while its FY21 figure jumped 27%, and FY22 climbed over 30%. The company’s strong bottom-line positivity helps it grab a Zacks Rank #1 (Strong Buy) right now, alongside its “A” grade for Growth and “B” for Value in our Style Scores system.

Ethan Allen’s strong outlook is supported by the booming housing market that is finally driven by millennials. And people who haven’t spent money on big trips and other pre-pandemic activities are prepared to keep spending on big-ticket items. This backdrop has pushed the Retail-Home Furnishings space into the top 8% of our over 250 Zacks industries, alongside Williams-Sonoma (WSM - Free Report) , RH (RH - Free Report) , Tempur Sealy (TPX - Free Report) , and others

Last November, the company raised its quarterly dividend by 19%, with its current 3.45% yield blowing away the 30-year Treasury’s 2.35% and its industry’s 0.37%. In another sign of strength, ETH announced on April 27 a special cash dividend in addition to its regular payment.

Plus, the furniture maker boasts a strong balance sheet, with no outstanding debt. It also faces fewer supply-side worries than some others, given its focus on manufacturing in North America.

Despite its climb and outperformance, Ethan Allen trades at 12.6X forward 12-month earnings. This marks a discount to its industry’s 18.9X. More importantly, ETH trades roughly in line with where it has been the last several years. And at around $29 a share, Ethan Allen’s low price might be attractive to some investors, especially given the opportunity to buy it on the dip.

Levi’s first quarter sales still fell 13%, but its guidance calls for a return to growth. The company’s Q2 revenue is projected to skyrocket 144% against an easy-to-compare period last year, with it expected to swing from an adjusted loss of -$0.48 to +$0.09 a share.

Longer-term, its FY21 sales are projected to climb by 24% to $5.5 billion, with another 10% growth expected in FY22 to see it reach $6.1 billion. This would see Levi return well above its pre-pandemic levels of $5.8 billion.

Meanwhile, its adjusted earnings are projected to soar by 430% to $1.11 a share in 2021, with FY22 set to climb 20% higher. Levi’s bottom-line revisions positivity helps it grab a Zacks Rank #1 (Strong Buy) at the moment, next to a “B” grade for Growth. And the company has beaten Zacks adjusted earnings estimates by an average of 55% in the trailing four periods.

Levi struggled following its return to the public markets in 2019, as investors feared denim was fading amid the rise of athleisure. But fashion is always changing and after a year-plus of being cooped up, consumers are ready to change up their looks and revamp their wardrobes. Investors started to jump into Levi in September 2020, with it now up 130% in the last year. Levi has popped over 40% in 2021, while Lululemon (LULU - Free Report) is down 9% and Nike (NKE - Free Report) has slipped 3%.

Wall Street is also excited that Levi, which sells various offerings for men, women, and kids under its namesake brand, Dockers, and others, is expanding beyond jeans. CEO Chip Bergh has said he expects half of Levi’s revenue to come from “products that are not denim bottoms” over the next decade, up from 11% in 2015 and 21% in 2020.

Along with expanding its non-denim business, Levi is working to boost its exposure at the modern retail titans. This includes a beefed-up deal with Target (TGT - Free Report) that features a lifestyle collection that ranges from home goods to and pet supplies.

Levi shares fell on Tuesday, as part of a pullback from its earlier May records, with it now sitting about 7% below its highs at roughly $28 a share. The dip has also pushed it to neutral RSI levels.

The stock also trades in line with its highly-ranked Retail-Apparel and Shoes industry at 24.3X forward earnings. Plus, Levi management raised its dividend for the second quarter, and all four of the brokerage rankings Zacks has for the stock are either “Strong Buys” or “Buys.”