Backed by the Finnish equipment vendor’s accelerated deployment activities, the collaboration is likely to not only boost the adoption of next-gen connectivity among end users but also strengthen its momentum with 5G wins across Scandinavia and the Baltic countries. Nokia will also provide adequate technical assistance for ensuring seamless operations and professional services like network optimization and integration.

Markedly, Net4Mobility was formed as a result of an alliance between two telcos — Telenor ASA (TELNY - Free Report) and Tele2 AB (TLTZY - Free Report) — in 2009 for the purpose of creating a joint 4G LTE network. The company’s network services cater to majority of the population based in the Scandinavian country. Given the current scenario wherein Swedish companies are strictly adhering to the ban on Chinese tech companies like Huawei citing security risks, the contract is considered a lucrative opportunity for Nokia to restore its leadership position, especially at a time when it is aiming to walk the extra mile to revive its faltering 5G business.

Nokia’s AirScale is touted as the industry-first commercial end-to-end 5G solution that offers massive capacity scaling with ultra-low latency. The unique technology helps operators to curtail their future capital expenditures and maximize the value of both licensed and unlicensed spectrum while bridging the gap between IT and telco. The AirScale Radio Access products deliver high-capacity mobile connectivity and minimize network complexity with low cost of ownership, which makes it worthwhile among communications service providers.

Apart from the ongoing deployment of 5G services, the Finnish equipment supplier will be responsible for enhancing the carrier’s legacy 4G network. The collaboration will also aid Net4Mobility to meet industry standards for security with Nokia’s advanced solutions. As part of the partnership, Net4Mobility will take advantage of the 3.5 GHz frequencies that it recently won during Sweden’s 5G auction. Notably, the spectrum band is considered ideal for dense urban coverage.

The 5G services, when combined with the AirScale portfolio, will not only facilitate customers to make the most out of ultra-high-speed and low-latency connectivity but also enable use cases across various verticals such as education, cloud gaming and Industry 4.0, to name a few. Driven by distinct strategies and focused endeavors like this, Nokia expects to add new sites over the span of the contract and fast-track the deployment of this enhanced network so that it reaches nearly 99.9% of the Swedish population by the end of 2023.

Markedly, Nokia is on track to deliver on its three-phased plan to achieve sustainable, profitable growth and technology leadership. It is well positioned for the ongoing technology cycle given the strength of its end-to-end portfolio. The company plans to expand its business into high-growth vertical markets to address growth opportunities. Customer focus and reduced long-term costs are anticipated to further propel its product roadmap and cost competitiveness through incremental 5G investments. 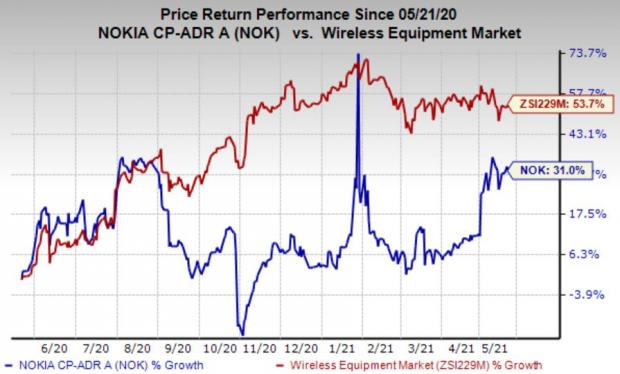 Another top-ranked stock in the industry is Clearfield, Inc. (CLFD - Free Report) , carrying a Zacks Rank #2. You can see the complete list of today’s Zacks #1 Rank (Strong Buy) stocks here.