Shares of Iovance Biotherapeutics, Inc. (IOVA - Free Report) slumped almost 40% on May 19 after the company announced that it will delay its biologics license application (“BLA”) submission to the FDA for its tumor-infiltrating lymphocyte (TIL) therapy candidate, lifileucel, for the treatment of metastatic melanoma. The company now expects the BLA filing to occur in the first half of 2022 that was previously expected to happen in 2021.

Iovance announced on May 18 that the FDA has provided regulatory feedback regarding its potency assays for lifileucel, based on data submitted by the company earlier this year. The FDA is likely to have interpreted assay data to be insufficient to support a BLA as the company stated that it will continue developing and validating its potency assays and plans to submit additional assay data in the second half of 2021.

Shares of Iovance have declined 64.8% so far this year compared with the industry’s 5.3% decrease. 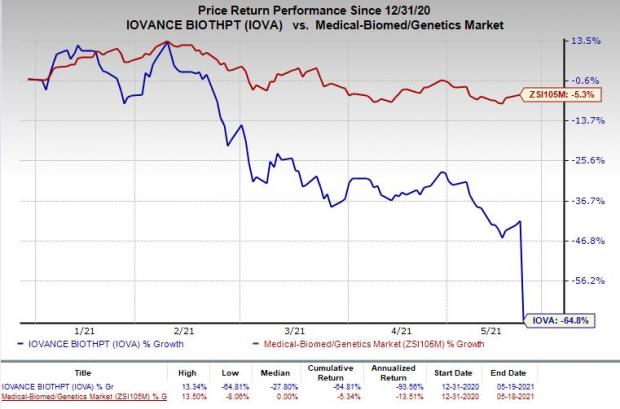 What is Potency Assay?

A potency assay is the quantitative measure of biological activity of a particular cellular or gene therapy. Per FDA’s guideline, potency measurement is necessary to establish a manufacturing process that will produce a consistent product with intended effectiveness as demonstrated in clinical studies. The assays are likely refined during different stages of clinical development, with most refined assays during late-stages of development. A well-defined potency assay or assays is necessary to demonstrate consistency between production lots and to assess comparability of different manufacturing processes These may also help to determine which product attributes are related to biological activity of a particular product. The complexity of cellular or gene therapies makes potency assays more necessary to maintain consistency of effectiveness for these therapies.

This is the second time within a span of nearly eight months that the FDA has invalidated the submitted assay data by the company and deemed it insufficient to support a BLA for the TIL therapy. In October 2020, the company had announced the first delay in BLA submission that was expected by the end of 2020 to 2021 due to non-agreement with the FDA on the required potency assay to fully define its TIL therapy. The non-resolution of defining potency assays for lifileucel has become a major overhang for the company as it has delayed the BLA submission by more than a year, adversely impacting the company’s prospects and its share price. Alignment with the FDA on a potency assay is an important step toward BLA submission for lifileucel due to its complex nature.

Please note that the company is developing lifileucel as a monotherapy for treating metastatic melanoma in the pivotal phase II C-144-01 study. It is also being evaluated for the treatment of metastatic cervical cancer in another pivotal phase II study — C-145-04. The company’s clinical data from both studies on lifileucel have been promising so far. However, the potency assay issue raised by the FDA for the melanoma BLA should impact the potential timeline for a BLA for cervical cancer. The company planned to meet with the FDA later in 2021 to discuss BLA submission plans for lifileucel in cervical cancer, which might get delayed due to this assay issue, if not resolved.