The S&P 500 slipped slightly on Friday, May 21 to end another up and down week that saw earnings reports from Target (TGT - Free Report) , Walmart (WMT - Free Report) , and other retailers. Meanwhile, the Nasdaq dipped 0.50%, after it jumped 1.8% Thursday as the bulls pushed it right to its 50-day moving average. And the Dow popped about 0.40%.

Wall Street then sold stocks based on the idea that the Fed will be forced to raise interest rates to tamp down rising prices. But buyers have stepped in recently every time they thought things had been overdone, with the S&P 500 finding support at its 50-day moving average, highlighting the broader economic positivity.

Thursday’s unemployment data marked the lowest levels since the initial coronavirus lockdowns. Meanwhile, Texas and other states have joined a group of at least 21 states that plan to cut off access to boosted unemployment benefits early after economists said they likely contributed to last month’s huge jobs miss, alongside child-care complications due to school closures and lingering virus fears.

Despite inflation worries, the broader market and economic fundamentals are strong. The overall S&P 500 earnings picture continues to improve and the economic reopening could help the U.S. post its best GDP growth in roughly 35 years (also read: Looking Ahead to Q2 Earnings Season).

The recent 50% fall in bitcoin, along with the Nasdaq’s February correction, and recent pullbacks are healthy recalibrations. Furthermore, even if the Fed is forced to slowly raise its interest rate above its near-zero levels, it doesn’t mean the end of TINA investing.

With this backdrop, here are two top-ranked Zacks growth stocks that investors might want to consider buying at rather deep discounts… 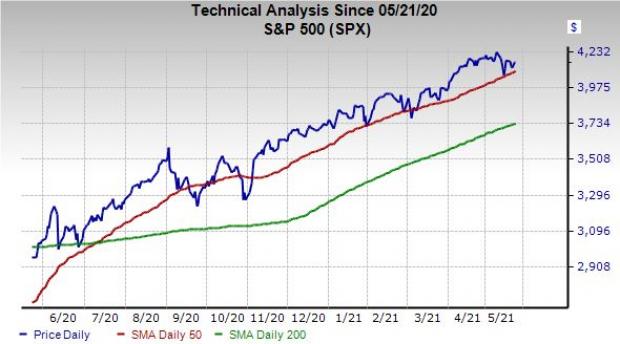 Digital Turbine rocketed higher in 2020 for its ability to thrive within a vital space that’s focused on the ever-growing world of smartphones and apps. Digital Turbine works to connect OEMs, mobile operators, and publishers with advertisers and developers for “frictionless app and content discovery, user acquisition and engagement, operational efficiency and monetization opportunities.”

The Austin, Texas-headquartered firm boasts it has delivered more than “three billion app preloads for tens of thousands advertising campaigns." APPS is also expanding through acquisitions, including its Mobile Posse purchase last March and even more in 2021.

Digital Turbine has made Deloitte's Technology Fast 500 list multiple times and its FY20 (last year) sales jumped 34%, which came on top of FY19’s 39%. Digital Turbine is set to release its Q4 and full-year FY21 results on May 26 and Zacks estimates call for its FY21 revenue to soar 126% to $314 million, with FY22 projected to skyrocket another 167% to $839 million. Meanwhile, its adjusted earnings are expected to surge 255% and 62%, respectively. 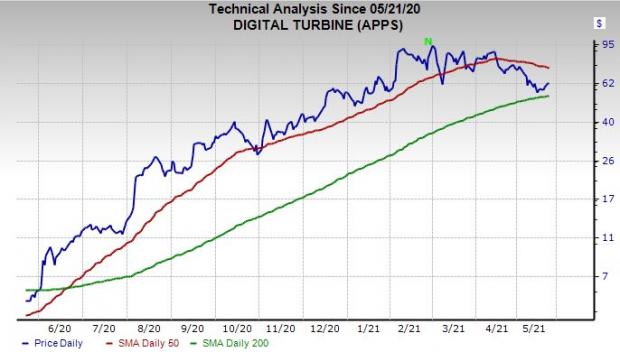 As we alluded to, APPS has skyrocketed 975% in the past year. The stock climbed all the way from under $7 a share to around $100 in early March. Luckily, Digital Turbine shares have come back to earth, as Wall Street took profits on growth names from Tesla (TSLA - Free Report) to Shopify (SHOP - Free Report) . At around $62 a share, the stock is trading 35% below its records and despite a recent pop, it still sits below neutral RSI levels (50) at 42.

Digital Turbine’s positive earnings revisions help it grab a Zacks Rank #1 (Strong Buy) right now and it has topped our quarterly EPS estimates by an average of 37% in the trailing three quarters. APPS also lands an “A” grade for Growth in our Style Scores system and all five brokerage recommendations Zacks has for the stock are “Strong Buys.”

Therefore, investors looking for a growth-focused tech play might want to consider buying APPS shares on the dip ahead of its upcoming earnings release on May 26.

Purple Innovation is a mattress company that refers to itself as a “digitally-native vertical brand.” This captures some important buzzwords in the Amazon (AMZN - Free Report) age. More importantly, Purple competes against other direct-to-consumer focused mattress players such as Casper Sleep (CSPR - Free Report) and Leesa that are continuing to shake up the space and try to challenge established giants like Tempur Sealy International (TPX - Free Report) . PRPL went public a few years back by merging with a publicly traded special purpose acquisition company, or SPAC.

The backbone of the company is its unique proprietary gel technology called Hyper-Elastic Polymer. Purple’s offerings include mattresses, pillows, seat cushions, bed frames, and more. PRPL’s products can be ordered directly online and found in various stores and showrooms. Its DTC e-commerce business boomed during the coronavirus, with its FY20 revenue up 51% to top 2019’s 50% and FY18’s 45% sales expansion.

Purple posted its Q1 FY21 results on May 17, with revenue up 52% and DTC sales 55% higher. The company’s gross margin also jumped to 46.9% from 43.5% in the year-ago period. PRPL did fall well short of our adjusted earnings estimates for the second quarter in a row.

Still, analysts upped their longer-term EPS guidance after the release and Zacks estimates call for its adjusted earnings to climb 28% in 2021 to $1.00 a share, with FY22 projected to jump 25% higher. Meanwhile, Purple’s sales are expected to climb 36% this year to $883 million and nearly 20% higher in FY22 to surpass $1 billion. 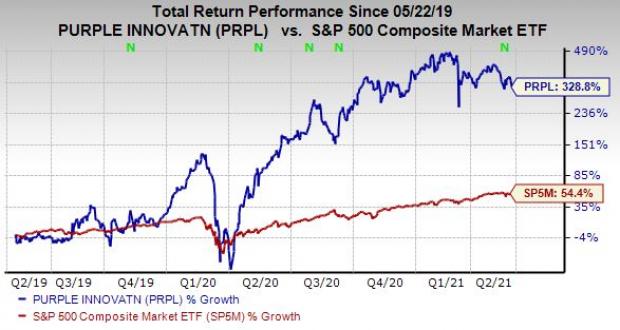 Before we dive deeper, investors should know that PRPL announced on May 18 a secondary public offering of at least 7.3 million shares at $30 each, which marked a discount to its closing price of $32.20 on Tuesday. Purple is not selling any stock and will not receive any proceeds. The sellers include Coliseum Capital Partners, L.P. and others. There is no dilution, but the stock sold off to below $30 a share given the discounted shares hitting the market.

The recent selling is part of a larger pullback in 2021 that’s seen PRPL fall about 25% from its February records. Despite the decline, the stock is still up 115% in the last year and 330% in the trailing 24 months. Purple bounced off oversold RSI levels of 30 on May 10 and it currently rests below neutral (50) at around 38, which could give it plenty of runway. Plus, Purple’s valuation picture remains solid.

Purple’s positive post-release earnings revisions help it land a Zacks Rank #1 (Strong Buy), alongside an “A” grade for Growth in our Style Scores system. And nine of the 10 brokerage recommendations Zacks has are “Strong Buys,” with the other at a “Buy.” Some investors might want to wait for a sign of a comeback and some of the recent selling to stop. But clearly Wall Street remains high on PRPL.