Here's Why Copart (CPRT) Warrants a Bullish Stance at the Moment

On May 24, we issued an updated research report on Copart, Inc. (CPRT - Free Report) . This Zacks Rank #1 (Strong Buy) company’s expanding footprint across the United States and international markets along with its digital ramp up, has made it an attractive bet at the moment. You can see the complete list of today’s Zacks #1 Rank stocks here.

In the past three months, shares of the company have gained 18.8%, while the industry has witnessed a rise of 18.2%. 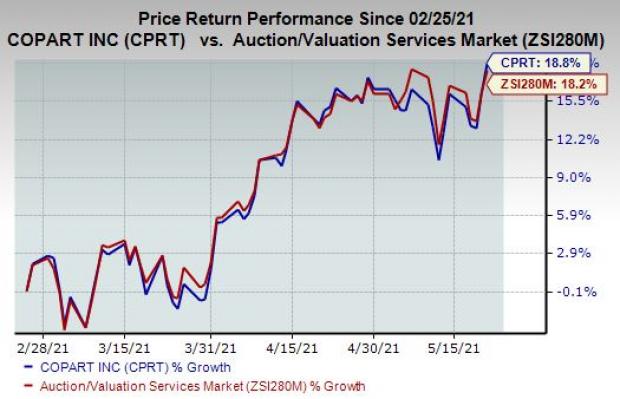 Texas-based Copart’s surging activity levels in the United States, and expansion efforts in the Canadian and European markets are anticipated to bolster the company’s future prospects. Moreover, the company’s solid e-commerce efforts are fueling growth in a competitive marketplace. Also, with the launch of Copart Max, the company has further stepped up its digital game.

To meet the ever-heightening demand from car buyers and sellers, Copart — which is considered the eBay (EBAY - Free Report) of salvage vehicles — has been doubling down on storage-capacity expansion. Along with that, an increased demand for its vehicle remarketing services and the higher average selling prices (ASPs) from the international online bidders are buoying the firm’s profits and revenues. Copart reported worldwide growth in ASPs of 48% for the fiscal third quarter, with the insurance ASP in the United States witnessing a jump of 50%.

Copart’s total debt-to-capital ratio stands at 0.12, lower than its industry's 0.22. This favorable reading indicates that the firm is not a much leveraged company. In addition, the company’s times interest earned ratio of 49.12 is favorable to the industry ratio of 22.17. While the low leverage of the firm boosts its financial flexibility to tap onto growth opportunities, the high times earned ratio lowers Copart’s default risk.

Moreover, Copart, which shares space with IAA Inc. (IAA - Free Report) and Liquidity Services, Inc. (LQDT - Free Report) , has an excellent track record in profitably integrating acquisitions to its benefit. In addition to opening hubs and expanding its network of facilities, the company’s strategic acquisitions are likely to bolster revenues. Copart’s recent partnership with CHAMPtitles, a leading developer of innovative online title processing software, bodes well for the upcoming period. The collaboration aims to introduce an automated digital platform for car sellers, including insurance companies, to alleviate the need for manual paper and mail-oriented vehicle title processing.